There’s nothing like getting to explore somewhere new with your dog. The world is full of so many things to be sniffed and chewed – why should we keep our pups cooped up at home? Their world could be so much bigger than the backyard – or the quick walkie they take around the block.

The dogs here have the right idea. These pups are climbing mountains, swimming seas, and inspiring us to get out and do the same with our own dogs. Their faithful humans take them everywhere they can, and their worlds are getting bigger and bigger – and so are their follower counts!

Even if you’re not quite the type to get up and get lost in the great outdoors with your dog, you’ll still love scrolling these incredible Instagram accounts from the comfort of your couch.

Corgi legs may not seem like the best way to get around, but Quintal has no trouble exploring on his four little stumps. Quintal and his human love to wander the outdoors – be it their grassy backyard, a trip to the mountains, or the beaches near their home in “Corgifornia.”

Each of these three Aussies has a story of their own. Bella was abandoned in a cardboard box as a puppy, Bolt was a “defect” puppy born with a broken tail to a breeder that didn’t want him, and Bonnie is deaf. Together, they’re living a big life out exploring the Mojave Desert – and they’re looking good doing it in their goggles!

We first heard about Lilly when the story of her adoption went viral a few years ago. She was found wandering alone with a heartbreaking message on the tag she wore. She found her way to her new human, Mercedes, at exactly the right time – Mercedes was suffering from mental health issues and has said before that if Lilly hadn’t come into her life at that time, she might not still be here.

They’ve been wandering together since, and have lost a sister, but gained two other rescues that join them on their adventures. Learn more about Lilly’s story on iHeartDogs and follow @loolydootandmo on Instagram

Czech photographer Jan Řeháček adopted Sitka knowing he needed a travel buddy. Sitka has since become Jan’s favorite subject to photograph. Some of our favorite photos are the ones where Sitka is calm, eyes closed, out in the wilderness with his head cradled in Jan’s hand.

It’s clear that the two are in their element when they’re outside together. @kopernikk on Instagram

Penni’s life had an extremely sad start. Rescuers were unsure of her age, but what they did know was that she had spent her entire life locked in the basement of a drug house, suffering severe physical and emotional abuse until the day she was thrown out on the street. Penni was in such terrible shape that it was decided she would be euthanized – but a rescue stepped in and saved her.

It was there that her dad, Blaine Deluca, found her. He has made sure that her world will never be so small as a basement ever again, and he is frequently seeking out new places for the two of them to explore. The photos are incredible – not just the ones of them out and about, but also the photos of Penni smiling the biggest Pittie smile you’ve ever seen! @pennidog on Instagram

If you love snow-capped mountains as much as you love dogs, you should really check out Demi and Snickers on Instagram. This pair lives in Norway with their human and makes the most of the incredible scenery. They sit at the top of high mountains and look down on lakes and rivers so blue-green and clear that they reflect the sky like mirrors!

There are a lot of things to climb in Norway, so there’s likely lots more they’ll explore – be sure you’re following them so you don’t miss a thing! @hikingbullies on Instagram

Okay. We couldn’t have a list of must-follow dogs without including this Instafamous pair. Henry (dog) was found at an adoption event as a pup, and immediately proved that he was meant to be an “outside dog”, hiking and climbing with his new family. But the family wasn’t complete without a cat, and they knew they needed one who could hang in the outdoors.

Baloo was another rescue, and mom just had a feeling that he was going to be the right fit. Baloo is proof that if you have instincts like this mom, you should trust your gut! Baloo and Henry are the perfect travel companions and could only have been brought together through the magic of adoption. Don’t miss their upcoming adventures and adorable photos! @henrythecoloradodog on Instagram

Whether you like big dogs, small dogs, or both, you’re going to want to follow Blizzard and Lulu! Lulu is an itty-bitty Japanese Chin who loves to keep warm in the fluffy fur of 126 lb. Saint-Bernard brother Blizzard. Lulu prefers to ride rather than walk. She and Blizzard are no strangers to kayaks and cars, and she can sometimes be found in a backpack on a bike. But her favorite place to be seems to be atop Blizzard’s back.

Their brother Brodie went viral a few years ago for his adorable relationship with his elderly neighbor, Miss Sally. Miss Sally has since moved to a care home, but Brodie still keeps in touch!  @blizzardandlulu on Instagram

Ace is another small guy exploring the big world. He may have little legs but if you’ve ever known a Jack Russell Terrier, you know that what they lack in size they make up in pure energy! He and his human are busy exploring the caps and coasts of Norway together. He hikes, he climbs, he swims, and he looks sharp in his harness while he’s doing it. 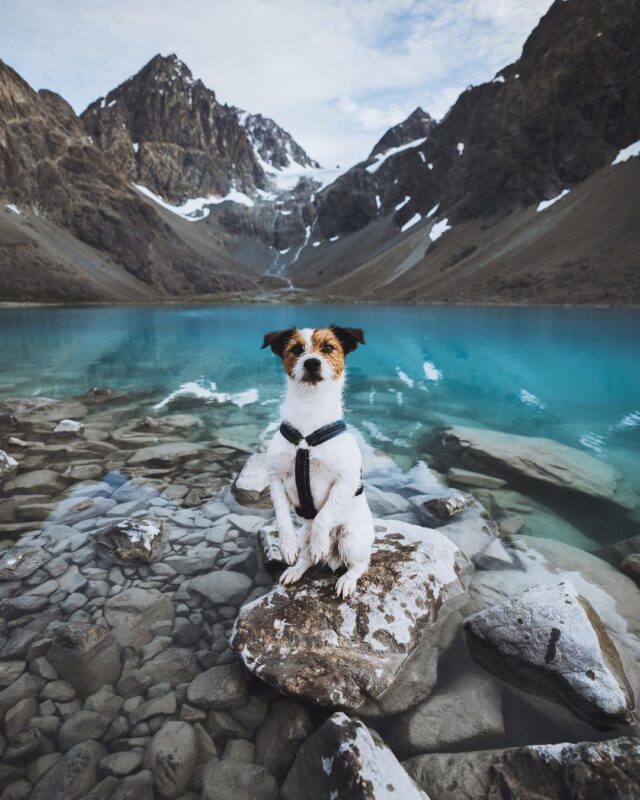 Of all the dogs meant to explore, one would not expect to see a Pug or a Boston Terrier. Pugs and Bostons weren’t exactly built to roam with their little legs, stout bodies, and flat faces, but that doesn’t stop Tucker and Betsie! They love big skies, green grass, and brightly colored bandanas. They may not be able to go as far or climb as high, but they’re still getting out in nature with their human.

Of course, she keeps an eye out for dangerous conditions like hot weather and makes sure she isn’t asking too much of her pups. When you wander, make sure you do it responsibly, like this group! @tuckeradventurepug on Instagram

I loves me a fluffy dog, and Loki is all fluff! He was born to be outdoors, and his human is happy to oblige. They’re currently living on the road, heading north along the West Coast. They’ve seen some interesting sights and even gave us a sweet DC/Marvel crossover pic when Loki met Aquaman on their trip!

We’ll get more coast, more sun, and more snow as Loki continues to travel and explore. @loki on Instagram