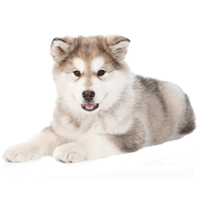 Brief History of the Alaskan Malamute

The Alaskan Malamute is all tied up in the history of the Great Land and its people. The word, Malamute, originated from the name of the Inuit natives living on the northwest Alaskan coast, who were known as the Mahlemut Eskimos. Dogs were an integral part of the lifestyle in the north. Unlike its lighter-boned counterpart, the Alaskan Husky, the massive stature of the Malamute made it ideal as a hunting companion for big game that the Inuits depended on, such as polar bears and seals. A Malamute could haul a carcass for miles over tundra and ice, while his thick double coat offered warmth to himself and his human if necessary. The Malamute evolved as a “freight dog,” born and bred for pulling heavy loads over long distances in bitter conditions, very different from the Husky who is built for speed.

With the onset of the Gold Rush, settlers noticed the big, furry dog and began to stage weight pulling competitions and races. They began to outcross the Malamute with other dogs and as a result, nearly rendered the breed extinct. In the 1920s, admirers began efforts to preserve the Malamute and restored it to its former characteristics. This resulted in the Malamute we know today; a huge, furry, loving companion very popular with dog show enthusiasts and as a family pet.

The Alaskan Malamute is a large, furry dog, powerful and lively. It is athletic and solidly built. Like other Nordic breeds, the Malamute has a heavy double coat, pointed ears, and tail that curls over its back. Despite having a wolfish appearance to its face and eyes, the Malamute manages to maintain a soft and friendly expression. The breed is usually white with black, grey or red shading.

The Alaskan Malamute is a friendly and confident dog. He is quick to assert himself in nearly any situation, be it with people or other dogs. He is typically good with children and strangers. However, he is known for having a high prey drive. He can be very hard on other animals, even dangerous. He demands a significant amount of exercise and loves to be outdoors. As a devoted pack animal, he also needs time with family. He is best suited for a very active home.

Since the Malamute is a cold weather dog who hails back thousands of years on the Alaskan tundra, the last thing someone should do is lock one up inside a small apartment. The dog must be carefully monitored in hot weather. He is a big dog that needs a significant amount of space and a high activity level in order to be happy. He sheds heavily twice a year and requires regular brushing. He needs physical activity to prevent boredom and the onset of behavioral issues such as digging and howling. If provided with what he needs, he will be a faithful and remarkable companion for many years.