You may have heard that dogs don’t understand time the way that we do. We may never really know. This could explain why they’re always excited to see us, whether we just got back from a day at work or we’re returning from a two-week vacation. Each time we are reunited is a time to celebrate!

Nobody understood this better than Cotton. Sweet Cotton was a service dog for his dad, a U.S. soldier. Cotton was deaf but that didn’t stop him from expressing himself and his love for his family. Cotton’s dad went away for a weekend of training. He had only been gone for two days but when Cotton saw him walking up the steps to their home, you would have thought he had been gone for two years!

Cotton watched out the window intently, pushing back the curtain with his cheek and nose to make sure he had the best line of sight possible. Once he realized it was his dad that was walking up the driveway, Cotton’s tail went into hyperspeed! He showered his daddy with kisses as he pushed his body up against his dad’s legs. Cotton’s reaction to his dad coming home was absolutely heart-melting!

Sadly, Cotton became ill shortly after this video was taken. His health continued to decline. Cotton’s family talked with his doctors and they had to make the gut-wrenching decision to help Cotton cross the Rainbow Bridge. On March 2nd, 2016, Cotton crossed over while he was surrounded by love in the comfort of his own home. It’s been said though that it’s not the number of years in someone’s life that matters. Instead, it’s the amount of life that you can pack into those years that makes all the difference. Cotton’s life was full of adventures and more love than he could have hoped for!

Cotton Was A Family Man And A Television Star

His first family wasn’t kind to him. Cotton was kept locked in a garden shed and was severely underweight. He was eventually taken to the Oregon Humane Society where he received the life-saving care he desperately needed. His furever family found him and their lives were all changed forever!

Cotton loved snuggling up on his daddy’s uniforms. He enjoyed being spoiled with bacon and eggs for breakfast and he was the best big brother to his baby human siblings. He even made it to Hollywood and starred in his own commercial! Cotton may be gone, but his memory still brings smiles and tears of pure joy to people today.

Here’s the adorable video of Cotton and his dad: 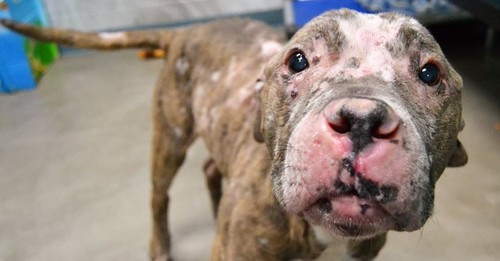