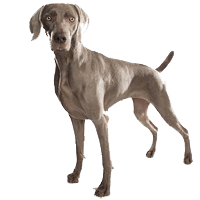 It is uncertain where the Weimaraners steel grey coloring originate, however it goes far back to being an important feature of this breed. The German Weimaraner Club controlled much of the activity of the dog, including registration. Dogs would not be sold to nonmembers, and it was actually quite difficult to obtain membership. Only approved breedings could be registered, and poor specimens were destroyed as procedure. An American who had gained entry to the exclusive club in 1929 brought two dogs back to America. Due to the breed’s exceptional obedience and hunting skills, American enthusiasts were attracted to the breed. In 1943 the AKC recognized the breed, yet it did not gain popularity in the United Kingdom until the 1950s.

An sophisticated and graceful breed, the Weimaraner has speed, endurance, a kind expression and an overall gentle demeanor. The breed is built for stamina, alertness, and balance. The Weimaraner has a short, glossy coat that is colored silver gray, shades of mouse or roe gray. Its gait is effortless and free, and its sense of smell is unmatched.

This breed of dog will grow frustrated and destructive if not given plenty of opportunities to exercise and get its energy out. It can be stubborn at times, but is very smart. Its high activity level and size may make it a bit overpowering for small children. It is alert and normally unsure of strangers, making it a perfect watchdog.

The Weimaraner will only require an occasional brushing or dry shampooing as necessary. Its nose can become burnt in the summertime, so extra care should be taken to prevent that from happening. This breed needs plenty of physical and mental activity and is happiest with access to a large yard and the inside of the home. The Weimaraner requires obedience training beginning around the age of 5 months, and it is a breed that will learn quickly if training is consistent.