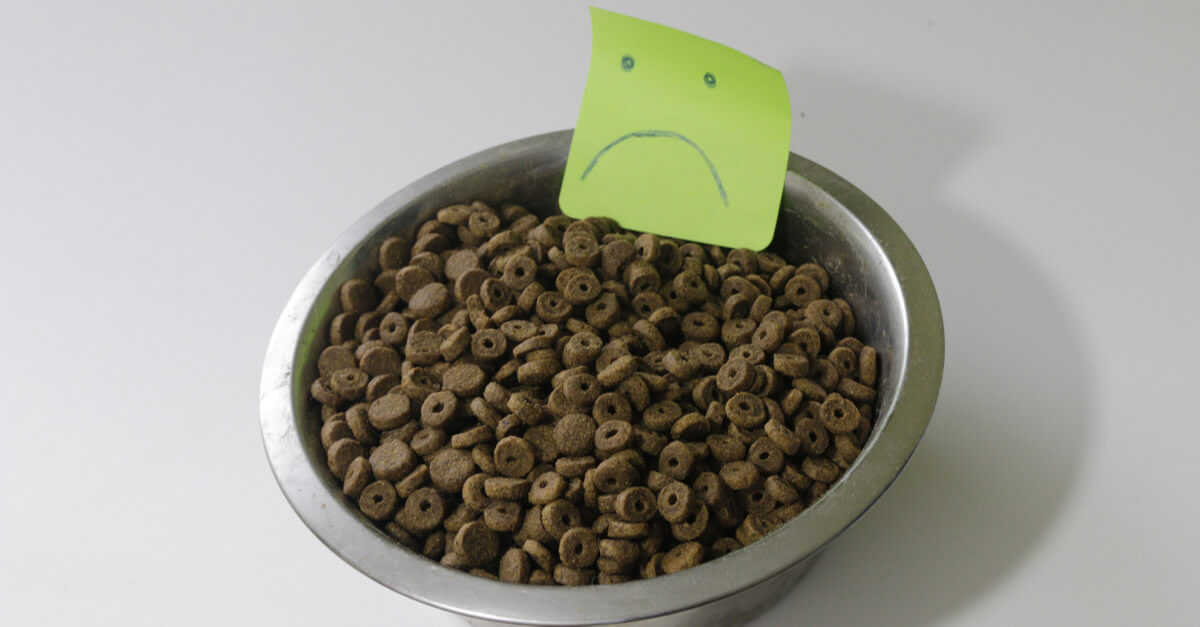 Every dog owner fears the day that they find out their dog’s daily food was recalled.

Sadly, recalls of dog food are quite common. Below we’ve compiled a list of the most popular dog food brands with large recalls within the last 10 years. Please note this is NOT a complete list of all recalled foods, but rather a summary of some of the most frequently purchased brands in the USA. 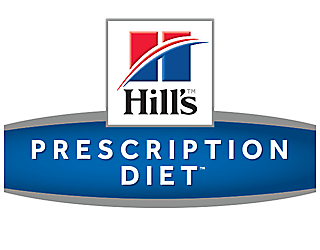 Hill’s Prescription and Science Diet is one of the most popular brands sold both in pet stores and directly by veterinarians. In early 2019, many in the pet world were shocked when a toxic level of Vitamin D made it into many of the canned foods made by this brand. Also, back in 2015 other products were withdrawn from the market by the company without a specific reason given.

Wellness recalled their foods 3 times between 2017 and 2012. The reasons given were elevated levels of beef thyroid hormone, moisture contamination, and salmonella contamination.

The following Kirkland dog food lines were recalled in 2012 due to salmonella contamination:

Pedigree dog food was recalled 3 times during the years 2012 and 2014. The reasons given were the presence of foreign material and small pieces of blue plastic found in the food.

Purina’s Pro Plan and Beneful products were recalled for salmonella contamination and a deficiency of required vitamins and minerals.

Between 2013 and 2011, Iams and Eukanuba foods were recalls 3 times for salmonella contamination (2x) and aflatoxin levels above the acceptable limit. Aflatoxins are cancer causing carcinogens that are the by-products of certain kinds of mold. 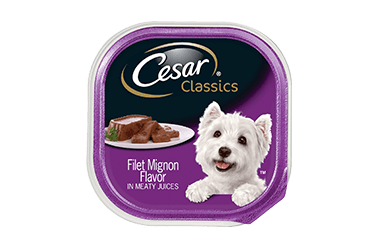 In October of 2016, Cesar’s recalled a variety of their wet dog food due to a potential choking risk from small pieces of plastic which entered the food during the manufacturing process.

In July of 2015 and again in December of 2015, Stella and Chewy’s recalled select lots of its frozen dinner morsels due to the presence of Listeria monocytogenes bacteria. Listeria can be dangerous to both pets and young children.

In a particularly disturbing recall in February of 2017, Evanger’s recalled specific lots of its beef products due to their potential of contamination with the deadly animal euthanasia drug, pentobarbital. Pentobarbital can severely affect animals that ingest it, and possibly cause effects such as drowsiness, dizziness, excitement, loss of balance or nausea — or in extreme cases, death.

In February of 2013, Honest Kitchen recalled select lots of dog foods because of possible contamination with Salmonella bacteria. The items were produced between August and November 2012 and sold nationwide in the USA & Canada via retail stores, mail order and online.

In May of 2012, Canidae announced a voluntary recall of 4 of its dry food products after being notified by manufacturer Diamond Pet Foods regarding the presence of Salmonella at its facility in Gaston, South Carolina facility.

Also in May of 2012, Solid Gold was also affected by the salmonella contamination from pet food manufacturer Diamond Pet Foods. They recalled 2 batches of their large breed dog foods as a result.

In 2010 and again in 2012, Natural Balance recalled select foods due to the presence of salmonella. Dog food recalls involving Salmonella contamination are potentially dangerous for both humans & dogs. People who handle dry food can easily become infected with the bacteria. It is especially serious for young children or the elderly.

With all of these serious recalls, how can you protect your dog?

2 Critical Ways to Protect Your Dog From Recalls Unfortunately, dog food recalls happen an an alarming rate. With all these popular brands with a history of recalls, who can you really trust? Our answer might surprise you: None of them! At least none of them exclusively that is.

#1 Rotate Foods to Protect Your Dog 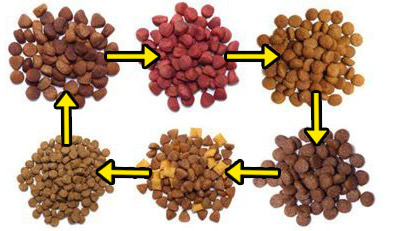 Dog food companies do not want you to read this next part. They would like you to believe that the only nutrition your dog needs for their entire life is found within a bag of their dog food. We disagree, and here is why.

We’re not saying you can never trust any commercial dog food company, we’re just saying you should never trust any one dog food company exclusively. When the stakes are high, diversify! Not only will your dog’s chances of getting sick from recalls be reduced if you rotate, but you’ll also expose them to a wider variety of nutrients, proteins, and ingredients, which will help reduce allergies and food intolerances later in life.

Trouble Changing Foods? Does your dog not tolerate changes well in their diet? This common, but also a sign of less than healthy microbiome in your dog’s gut. You can reduce the chances of digestive upset when changing foods by slowly mixing the new food with the old one and by using dog safe probiotics.

Imagine feeding your human child only fast food? That would never happen! There’s a place for convenience, and kibble is both convenient and relatively inexpensive. But should a processed and preserved food ever represent your dog’s entire diet? We would argue emphatically, no!

In addition to rotating commercial foods, consider adding fresh food toppers over your dog’s every day food. Some of our favorites are eggs, chicken breast, ground beef or lamb. And don’t forget the fruits and veggies! Dogs can derive huge benefits from the phytonutrients found in plants like blueberries, kale, and carrots.

An easy way to sneak both protein and fresh fruits and veggies into your dog’s diet is by using Freeze dried toppers. Toppers have become one of the fastest growing product categories in pet stores, and for good reason. Freeze dried meat preserves the nutrients of protein, offering more benefit to your dog’s body. Kibble on the other hand, destroys much of the value in the high-heat manufacturing process.

Plus, there’s an added benefit of freeze dried topper: dogs go absolutely crazy at meal time! We like the Happy, Healthy brand of toppers because it includes chicken or beef, probiotics (helps the transition), blueberries, kale, and carrots for additional nutrition. 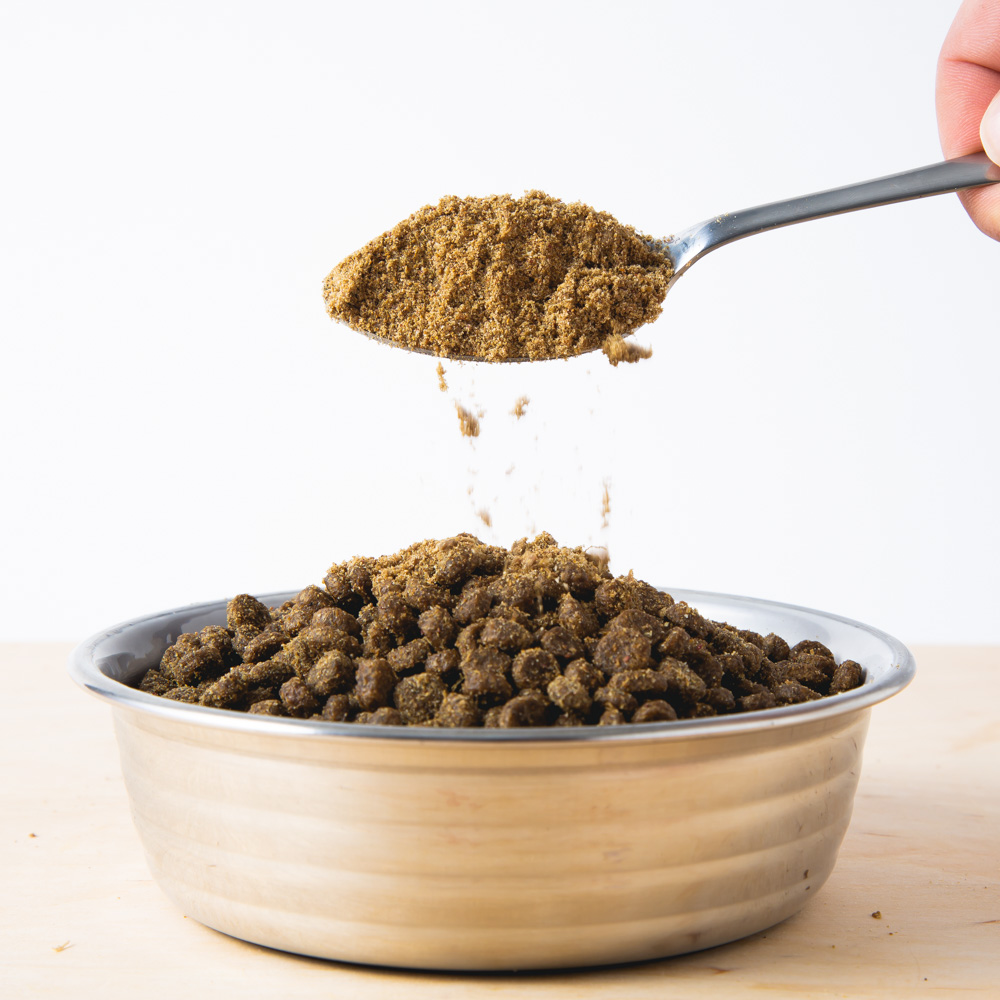 Unlike kibble, no heat is used with a freeze dried product, so the meat is as close to nature as possible. The addition of a small amount of fruits and vegetables helps increase your dog’s intake of natural vitamins and valuable phytonutrients that are not found in dry dog food.