It seems to be a commonly held belief that dogs eat grass when they feel nauseated. There was a study that looked into this and found that only 8% of plant-eating dogs showed signs of illness prior to the grass eating and 22% vomited after eating grass. The dogs that seemed sick prior to the grass ingestion were the ones most likely to vomit after. Their study comprised more than 1,500 client-owned dogs.¹ So the numbers do not completely support that your dog eats grass because they feel ill, but many people would not agree with the findings, and the dogs are not commenting. 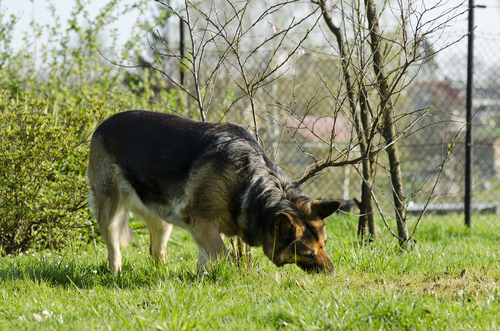 THEORY #2 – Your Dog’s Diet is Insufficient

Other people think that dogs eat grass as a sign of a dietary deficiency. The dogs in the study were fed a variety of different diets and there appeared to be no correlation between what the diet was comprised of and the likelihood of grass eating, so the explanation regarding dietary deficiency was not proven here either.1 Even so, make sure that your dog eats a high-quality balanced diet so you do not have to worry about deficiency.

The same study concluded that consuming grass is a normal tendency inherited from dogs’ wild ancestors. People have postulated that in the wild, dogs’ ancestors would have ingested prey that had plant matter in their bowels and this drives dogs to seek it. Since dogs have evolved to be omnivores like we are, it is not beyond the realm of possibility that they feel an appetite for plant matter evidenced by grass eating.² 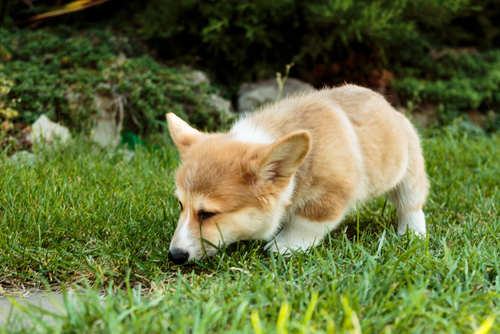 THEORY #4 – Your Dog is Avoiding Parasites

There have been studies in wild chimps that suggested they ingest plant material to increase intestinal motility and help rid them of intestinal parasites.³ Most of our pet dogs are controlled for parasites, but instincts may still drive their behavior.

The most likely reason that dogs eat grass is because it is a rewarding and fun behavior. In a study of giant pandas (whose peculiar plant appetite has landed them on the endangered species list), scientists examined why they would choose to eat only bamboo. What they found is that eating and appetite are a very complex interaction of internal chemicals, including dopamine, which is thought to be associated with pleasure-reward in many species.

Their findings seemed to suggest that the giant panda eats bamboo to help stimulate dopamine metabolism. Eating bamboo allows the panda to experience “reward” (i.e. pleasure) and so the panda chooses to eat it.4 Maybe dogs chew on grass because it causes a release of dopamine reward for them too. 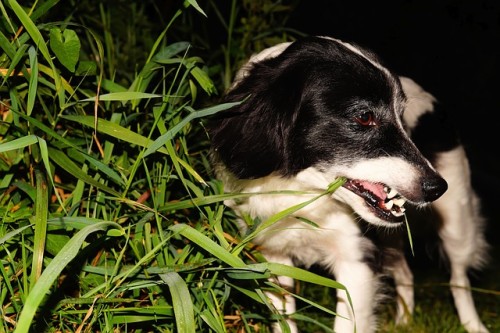 No matter what the real reason is that dogs eat grass (and it may be different for different dogs or a combination of all the above), you can rest assured that grass eating is a common behavior of normal, healthy dogs. If your dog seems sick or vomits more than occasionally (whether associated with grass-eating or not), you should see a veterinarian. All dogs should be on a regular parasite control program that is overseen by a veterinarian regardless of whether they eat grass or not.