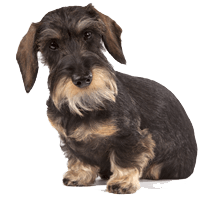 The Dachshund is said to have originated in Germany as a type of hunting dog. Though the breed’s origins can be traced as far back as the 15th century, the breed’s development truly began in the 17th century. Called Dachshunds, or translated to “badger-dogs,” these short and lengthy hounds did exactly what their name entitled. They were used to hunt badgers. Miniature smooth-coated Dachshunds were eventually bred later on by crossing the breed with toy pinschers and terriers. The long-haired variety was created by being crossed with the Papillon, and the wire-haired type was a result from a cross with the Miniature Schnauzer. The Dachshund is a very popular pet in the American household.

The Dachshund is a short-legged breed with an elongated and muscular body. They normally come in two sizes, miniature and standard. They also come in three coat varieties, smooth or short-haired, wire-haired, and long-haired. The head of the Dachshund features medium, almond-shaped eyes that offer a friendly and energetic expression. The ears are somewhat long in proportion to the rest of their body. They frame the face and are set up near the top of the head. They’ve got a lengthy, cone-shaped muzzle that features a black nose with open nostrils. The neck is firm, muscular, and slightly arched. The Dachshunds front legs are short but powerful and toned. The front feet are compact with featuring thick nails and protective, thick pads. The thighs are small but strong, and the back feet are slightly smaller than the front in size comparison. The tail of this breed is thin and straight. The gait of the Dachshund is described as smooth and steady. The coat of the smooth or short-haired variety is short and shiny. The coat of the wire-haired variety features a rough outer coat and a softer, shorter undercoat. The coat of the long-haired Dachshund is usually slightly wavy and longer at the neck, chest and tail. The breed can come in all colors except white.

The Dachshund enjoys hunting, digging and seeking adventure. While this breed has an independent personality, it will usually join in on family activities. They are known to be good with the children from their own household, but extra care should be taken as some may not do well with unfamiliar children. This breed normally gets along well with other pets and dogs in the home, but early socialization is a must in order for them to live peacefully among a cat. This breed is known to sometimes display jealous, protective and irritable behaviors, and they can be quick to snap when teased. The Dachshund is generally distant around strangers, and some tend to bark.

The coat variety of your Dachshund has a lot to do with how much maintenance will be required. A smooth or short-haired coat is easy to care, for and only needs to be brushed occasionally to remove any loose hairs. The long-haired coat should be brushed at least two times per week to prevent matting or tangling, and also occasional trimmings. The wire-haired coat should be brushed at least once a week, and any stray or long hairs should be trimmed as necessary. It is said that stripping is recommended at least twice a year to remove dead hair. This breed should be bathed or dry shampooed only when necessary to avoid stripping the skin of natural oils. Be sure to clean the ears regularly to prevent mites as well as bacteria or fungus growth. Though this breed is quite energetic, short walks on a leash and playing fetch in the yard can easily meet its exercise requirements. The Dachshund is considered good for an apartment dwelling. This breed should always be discouraged from jumping to help prevent any potential spinal damage.