Meet Glory, who is a Terrier mix dog. The poor pup was found dumped in the most disgusting condition by the roadside. The person who came across her thought she had passed away, but soon realized that her eyes and mouth were sealed shut with super glue. 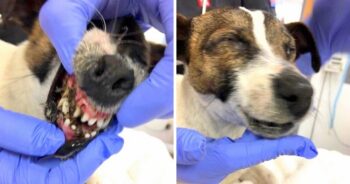 Glory was rushed to the local  hospital where they discovered bruises on her stomach after being hit from someone. She was taken to the Emergency Room where the doctors spent countless hours to help remove the glue and tend to her other wounds caused by it.

Glory was only able to show personality after weeks of recovery. She was later shifted to a loving foster family, where she was looked after by her foster father. Later, the Waggy family came forward to adopt her. They’re looking forward to. . .  Click to continue reading >> MORE >>