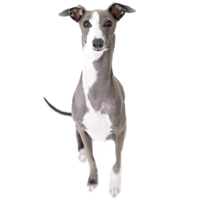 The breed became very popular and valued in England because of its ability to find and catch small game such as rabbits, therefore providing a source of food for its owners. For approximately 400 years, Forest Laws were in effect in England which prohibited any commoners from keeping healthy greyhounds close to royal forests. Later down the line it was repealed. It was sometime during the 1800s that coursing became a recreational or leisure time activity for the upper-class. The greyhound was first introduced to America by early settlers, where it proved its talent and skill for open plains coursing. The greyhound then began to be specifically bred for track racing. Soon after, the Greyhound was divided into racing dogs variety or show dogs variety, and the two types were very rarely interbred.

The Greyhound is a breed that was built for speed. It features elongated, toned back legs with straight front legs, and an overall streamlined appearance. Its back is very strong and features a flexible, arched spine. The feet are long and narrow. The head of this dog is long and narrow as well, and it features a pointed, powerful muzzle with an even bite. The eyes of the Greyhound offer a spirited and curious expression. The ears are small and folded back, and they sit on the widest part of the dogs skull. The neck is thin yet lean and blends smoothly into the arched back. The long tail is curved slightly upward and is normally carried low. The coat is short and firm. It comes in a variety of color combinations such as black, fawn, brindle, blue, grey, white, and red.

The Greyhound is gentle, quiet and loving, making it the perfect pet. Though it has a reputation for its speed, this breed in not actually known to be a high-energy dog. In fact, it will often curl up in a ball and take a nap while indoors. The greyhound is tolerant and friendly with children, but any rough play or teasing with the dog should be discouraged. This breed is often compatible with other non-canine pets, even cats. If raised from a very young age, the Greyhound should be socialized to avoid timidity. This breed is faithful, friendly, and enjoyable to be around. Overbearing training techniques are discouraged as it works against a positive result. The Greyhound is not known to excessively bark, and is generally quite easy to housebreak.

The Greyhounds coat is short and firm, and only requires a brushing when necessary. It is recommended to use dry shampoo, and use water to bathe them only when you feel it is needed. The greyhound is an average shedder. It is said that rubbing the coat with chamois will result in a healthy, lustrous appearance. Trim the nails on a regular basis to prevent them from growing uncomfortably long. Since they are considered to be creatures of habit, it is best to provide the Greyhound with a long walk at the same time each day to create a routine for them. It is also very important to give them plenty of opportunities to run freely in a safe, fenced-in area. This breed should have absolutely no issues living in an apartment as long as it gets a substantial amount of daily exercise. The greyhound is extremely sensitive to cold weather because of its thin skin, so a cozy, warm bed must be provided. This type of dog is prone to bloat, and should be fed small meals two or three times a day as opposed to one large meal a day. It also should be noted that this breed is particularly sensitive to chemicals, including pesticides.