In their Tennessee home, Bryan and Alicia Holloway would frequently let their 18-month-old son, Bryson, play with their family dog in the yard. The Holloways were certain that their child was secure with Shiloh, their bright Australian Shepherd puppy. 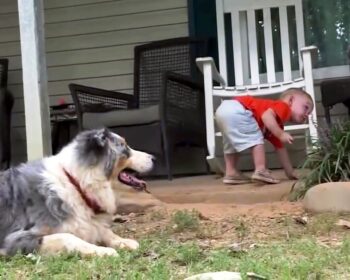 When the parents discovered Shiloh lunging at Bryson while playing in the yard one day, they became concerned. For a second, the Holloways had their doubts about Shiloh’s intentions. But then they noticed a huge Copperhead snake slithering past their son’s foot! Shiloh didn’t seem to care about his own well being and lunged at the snake. 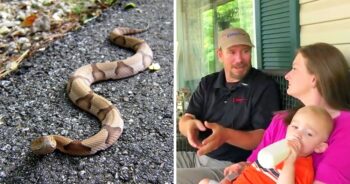 Shiloh quickly used his body to protect his brother from the snake, which then slithered into the yard. The serpent escaped the yard but the dog became quivering and fell to the ground. The parents understood that their brave dog had been bitten by a poisonous snake. They rushed Shiloh to the hospital, where he was given appropriate antibiotics that helped save his life.

Related Story:  Man Held Baby Critter, Paraded Her Up And Down Beach So Her Cries Were Heard 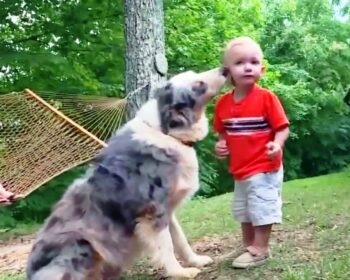 Shiloh was not injured in the attack, but he was still affected by the incident. Shiloh suffered severe swelling and pain for a few weeks, but he is now doing well. The family is grateful to Shiloh for putting himself in danger to save their little boy. They consider themselves fortunate to have such a dedicated and brave friend in the family.

Be sure to WATCH the video below and pass it onto a friend or family member!