Stories suggest that these dogs were exported from Britain for the purpose of game hunting, and that they were also used by the Celts as war dogs. As far as the origin of the Pugnaces Britanniae is concerned, there is unproven speculation that they were descended from dogs brought to Britain by the Phoenicians in the 6th century BC. The Alaunt is likely to have been another genetic predecessor to the English Mastiff. Introduced by the Normans, these dogs were developed by the Alans who had migrated into France due to pressure by the Huns at the start of the fifth century. Intriguingly they were known from the Romans to live in a region about 700 km to the north of the region where the Assyrians once lived. Again, any canine connections are speculative. Mastiffs were also kept at Hadzor Hall and owned by members of the Galton family, including Charles Darwin. Some theories suggest that the Mastiff first came to America on the Mayflower, but the breed’s documented entry to America did not occur until the late 19th century.

The Mastiff is known for having a massive body, broad skull and head. It is the largest dog breed in terms of mass. On average, this breed is slightly heavier than the Saint Bernard, although there is a considerable mass overlap between these two breeds. Though the Irish Wolfhound and Great Dane can be more than six inches taller than the Mastiff, they are not as heavy. The body is large and robust, with forelegs that are set wide apart. The length of the body taken from the point of the shoulder to the point of the buttock is greater than the height at the withers.

What the Lion is to the Cat, the Mastiff is to the Dog. The noblest of the family; his courage does not exceed his temper and generosity. The Mastiffs docility is perfect; the teasing of the smaller kinds will hardly provoke them. Supervision should be provided while it is playing with children, simply because it’s size can cause unintentional accidents. Courageous, dignified and well mannered are perfect to describe the Mastiff.

The Mastiffs strong and fast-growing nails should be trimmed regularly with a nail clipper or grinder to avoid overgrowth and cracking. Their ears should be checked regularly to avoid a buildup of wax and debris which can result in an infection. Teeth should be brushed regularly and the wrinkles on the face and head need to be wiped regularly to prevent bacterial growth. This breed of dog needs some exercise during the week, whether you throw a ball around the yard or take them on a walk around the neighborhood.

English Mastiff Protects Sister At The Bus Stop Every Morning 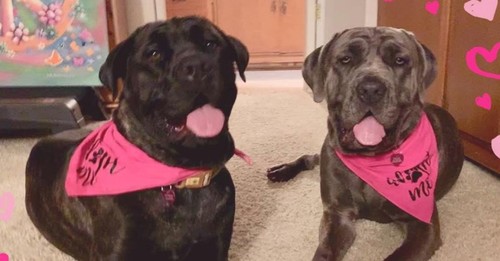