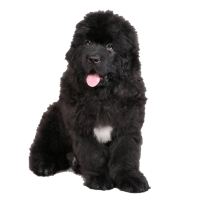 Regardless of its exact origin, the result was a large dog is excellent in and around the water. It was known to be an incredible swimmer, and was used to save drowning people. In 1919, a Newfoundland was actually recognized for pulling in a lifeboat carrying about twenty people from a shipwreck. Some other work that the Newfoundland has been used for includes hunting, sled pulling, guarding and hauling in fishing nets. The dog adjusted very well to the harsh Newfoundland climate and weather, developing an resistant coat and webbed toes. The breed is generally all black with the exception of the “Landseer” type (named after the artist who first portrayed them), which is white and black.

The Newfoundland is a large and slow moving dog. It is strong and athletic, and very capable of rescuing drowning victims easily even in rough waters. Although it loves being in water, it is just as happy to be on land and is useful as a draft animal. Its gait is powerful, yet graceful and effortless. The Newfoundland has a broad head with small triangular ears that hang close to their cheeks. The feet are webbed, and the coat is actually water repellent. The breed’s long outer coat is coarse and either straight or with a slight wave. The undercoat is dense and soft. The coat is colored in black, brown, gray, and white and black. Please note that in some European countries the Landseer and the Newfoundland are separate breeds.

This dog is laid-back, calm and docile. An English Romantic poet named Lord Byron, wrote that the Newfoundland exhibits “Courage without ferocity, and all the virtues of a man without his vices.” The breed is very intelligent with similar emotions to that of a human. It is devoted to its family and makes a great watchdog. It is wary of strangers and seems to be able to quickly sense if someone has bad intentions or a strange overall vibe. The Newfoundland loves children and exhibits nothing but patience with them.

The Newfoundland needs brushed about once or twice a week with a hard brush to avoid matting of the coat. The undercoat sheds about twice yearly, heaviest shedding is in the springtime. Using dry shampoo to keep the dog smelling and looking good is a better choice than bathing constantly, because bathing will strip the skin of natural oils. Newfoundlands are known to be sloppy drinkers and tend to drool excessively at times. This breed enjoys lazy and relaxing afternoons, but it does require some sort of daily exercise. Its exercise routine should include swimming as often as possible because this is one of their natural born hobbies. It prefers cold climates over warm. In fact, the Newfoundland cannot tolerate heat and care should be taken during the hotter months of the year. If spending time outdoors on a warm day, it should be given plenty of fresh ice water and a place to rest in the shade. Although relatively inactive inside, it still requires plenty of space to stretch out and be comfortable, making it an inappropriate choice for an apartment. It is a better choice for a family with a good-sized home and medium to large fenced yard. Training requires calm, firm and consistent commands, this breed is sensitive to tone of voice.