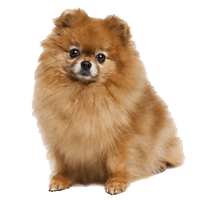 The first Pomeranians did not look like Pomeranians at all actually, and they were not called by that name up until they were introduced to England. Majority of them were white in color, and weighed as much as 30 pounds each. The breed did not become very popular until Queen Victoria began to notice it and build up its reputation, it was then recognized by the English Kennel Club in 1870. The breed was later recognized by the AKC in the early 1900s. Breeders began making extra efforts to keep the coat as puffy as possible. The general average size for a Pomeranian is only four to five pounds today. It is a very loving companion and makes a great watchdog.

This breed is a compact, squarely proportioned dog with a very abundant and fluffy coat. It possesses a few spitz characteristics such as the small ears, a bountiful double coat, and a curved tail. Its ears are triangular in shape, erect and and upright. Its plumed tail lies flat on its back with feathering around the tip. Some Pomeranians are known for their fox-like face, while others think it resembles more of a baby doll or plush animal. The eyes display an alert, curious and proud expression. This breed has a very soft undercoat with an bountiful, rougher outer coat that flows off the body. It also features a thick ruff of fur around its neck that gives the breed its fluffy, plush look. Solid colors varieties are usually red, orange, white or cream, blue, brown or black in appearance, it also comes in white with colored markings such as black and tan.

The Pomeranian is an outgoing, curious and playful breed. It is also proud and independent, to the point where it acts cocky. It is playful and also has the potential to be very intelligent and well behaved, but at times it can be too demanding and may not obey commands if not trained properly. It makes a great watchdog due to its natural yearn to bark at strange people and things, but it must be trained not to bark excessively on top of that. It becomes nervous around young children, it may be prone to snapping if teased or roughhoused. It makes a great companion for senior citizens because it is truly a lap dog a heart. It is unlike any other toy breeds, and also is known to be a picky eater at times so it make take a bit of time to find a quality dog food that it likes.

This small dog requires a large amount of coat maintenance. It must be brushed daily to prevent tangling and matting of the hair. It is a time consuming job that requires patience and care, however the hair should fall nicely into place after brushing making it a fairly simple procedure. Bathe once a month, clean around the eyes and ears, and brush its teeth on a regular basis to avoid dental issues later down the line. This breeds undercoat sheds once or twice a year, although the outer coat sheds continuously. As such a small breed that remains active, a short walk or indoor game is all that is necessary to keep this toy dog in good condition and health. The Pomeranian is suited for all environments – from an apartment unit to a huge ranch. It is a very sociable breed, and should not be kept to live outdoors. In hot weather, it can become overheated so care must be taken to prevent heat stroke in the warmer months of the year.