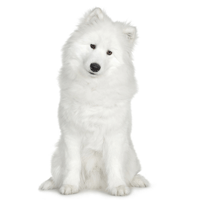 This breed takes its name from the Samoyedic peoples of Siberia. These spitz dogs were utilized to hunt, pull sleds and protect their families from predators. Both as a worker and as a companion, the Samoyed would sleep the with children in order to keep them warm in the frosty, harsh climate. The first of the breed arrived in England in the late 1800s. Queen Alexandria received a Samoyed as a generous gift, and she went on to breed and build a reputation for the resilient dog. Even today, modern pedigrees can be traced all the way back to her dogs. Later down the line in 1906, the Samoyed finally reached America. The loving, kind nature and sophisticated beauty of this breed makes it a very well known house pet today.

A few words to describe this working dog is bravery, grace, beauty and strength. It is compact and muscular in overall appearance. It has a quick stride, and was built for speed and endurance. It gets its nickname “the smiling dog,” from its upturned mouth and its constant content expression. This breed is recognized for its abundant, pure white coat with a feathery tail that curls over its backside. Its fur is very resilient of weather conditions, which enables it to work or play in the snow for long periods of time. It features a dense, plush undercoat and a rougher outer coat that stands straight out and has a faint silver shine over it. Colors include pure white, white and biscuit and cream.

The Samoyed is eager to please and a gentle breed that bonds extremely closely with its family members. It usually loves playing with other pets and is generally great with children, although it may have a natural tendency to herd younger kids. Even though it barks, sometimes excessively, it is much too friendly to be a successful watch or guard dog. This dog is known to even be playful with strangers, and does not express any timidity or shyness. The Samoyed is pretty inactive while indoors, however it can develop unwanted or destructive behavior if not exercised both physically and mentally on a regular basis. It is stubborn and may dig, chew and bark if it feels bored.

During shedding seasons, which is normally twice a year, it is mandatory to brush any loose or dead hairs from your dog’s coat. The rest of the year, it is recommended to be brushed two to three times a week. It should be bathed only when necessary to avoid stripping the skin of important oils. It enjoys being put to work and being productive, it can achieve some of its exercise through work activities, such as pulling or herding. It loves cold weather and can survive outdoors in temperate to cold climates, but is happier mentally if it can live inside with its family. This breed is not recommended for hot climates because of its thick coat, it was built to keep itself warm from extremely cold climates. So please take that into consideration when the warmer months roll around. The Samoyed can definitely be difficult to train due to independence, however regular positive training is necessary as it can become very headstrong and unresponsive to commands if it feels bored, uninterested or feels that it is being treated harshly. Begin training at an early age with a consistent and gentle hand.