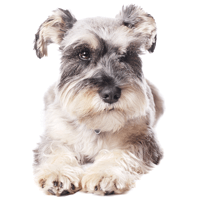 Stories suggest that the Schnauzer is a blend of both hunting and working terriers. It was a cross with wirehaired pinschers, black German poodles and gray wolf spitz. The result of crossing them was a clever rodent catcher and talented guard dog. In the beginning of the 20th century, these particular dogs were appreciated among farmers and utilized for guarding their carts at the marketplace. The Schnauzer was first exhibited in the Third German International Show at Hanover in 1879. By the 1900s, they were highly popular show dogs across the map, but America did not show so much interest in this scruffy little breed. Though German breeders stood behind it as a working dog, Americans considered it to be a type of terrier. It was later reclassified in its rightful class as a working dog. Schnauzers were used as a dispatch carrier and aide during World War I, and was also used in police work along with the giant Schnauzer. The Schnauzer Club of America was formed in 1925. Today, the standard sized Schnauzer is not as popular as the giant version of the breed.

This breed is known for its very square, boxy shape. It has a quick, graceful stride and its eyes offer an expression of faithfulness and understanding. The coat of the Schnauzer is thick, coarse and wiry. Colors include salt and pepper, solid black, or black and silver. One of its most popular characteristics being the full moustache, bushy eyebrows and scruffy beard.

The standard Schnauzer is highly intelligent resulting in a personality that can sometimes come off as stubborn and mischievous. This Schnauzer is loyal and devoted to its family and wary of strangers, making it an excellent choice for a guard dog or watchdog. It is great with children, although it can show some aggressive or dominant behaviors toward strange dogs or other non-canine animals. It is known to  become overly protective if it has not had proper training or socialization.

The coat of the standard Schnauzer should be brushed thoroughly two or three times a week because it is so coarse and wiry. Special attention should be given to the leg and beard hair, which tends to mat easily. Every season a professional grooming is recommended. Trim around the eyes and ears to prevent them from growing out too long and obstructing their view, and clean its long whiskers after meals to prevent any bacteria or buildup from forming around the mouth. This breed is energetic and requires daily exercise, a long walk or a romp in a safe area would suffice. This breed does best when it has access to the indoors as well as outdoors, rather than being kept to live in one or the other. It can also do well in an apartment as long as daily activity and exercise is given. Training should be consistent and it is sensitive to its master’s voice and tone.