For us die-hard dog lovers, one’s love of the canine kind is a non-negotiable factor when it comes to a romantic partner. Believe it or not, there are a few sites dedicated to matching dog lovers, but this particular story began on a group page for people who are partial to Boxers.

Almost a year ago on iHeartDogs’ very own iHeartBoxers group page, two strangers with a love for this silly, loyal breed found each other by chance. Soon, they discovered that they had more than their affection for dogs in common!

Their love story started when another group member suggested that there should be a dating site exclusively for Boxer lovers. While dozens of people commented on the post, Shelley and Carl sparked an instant connection.

Carl was the first to comment, listing his location to indicate that he was onboard for this kind of “dating service”! Shortly after, Shelley chimed in. 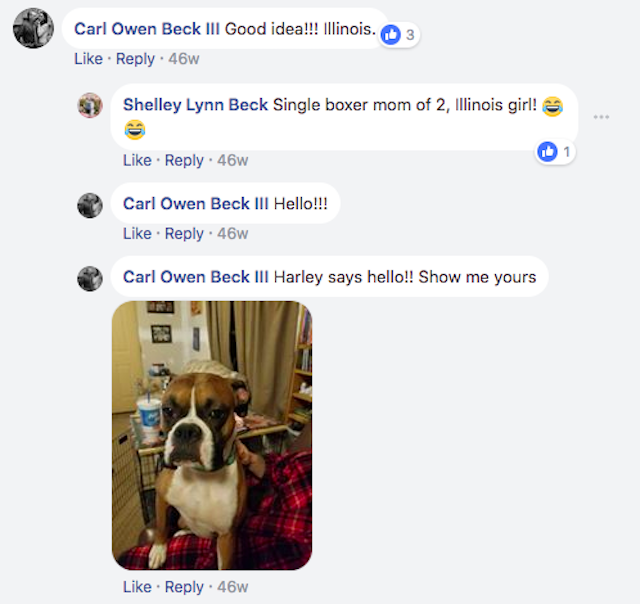 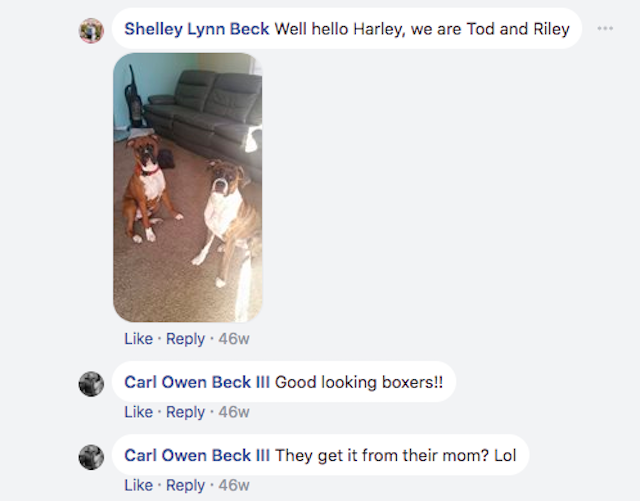 “I thought it was funny to comment on the post that talked about Boxer parents being a ‘special breed,'” Carl jokingly told iHeartDogs. “So I made a comment and went to bed.”

The next morning, he awoke to the notification of Shelley’s reply, and decided that he wanted to learn more about this mysterious Boxer lover.

“I did the responsible thing that any good adult should do: I creeped her on her Facebook page!” he said.

“I saw a woman who was so beautiful, I thought there was no way she would consider going out with me. [But] I also thought, “It’s Facebook, what do I have to lose? The worst she could say is ‘no’! So we started talking. We quickly talked about our dogs, our careers, our faith, and what we were looking for in a relationship.”

Although the iHeartBoxer group has tens of thousands of members (there are currently over 50,000), Carl and Shelley both happened to live in Illinois. However, their cities were a ways apart. But after many long and personal conversations, the two finally decided to meet.

“Our first date was on my birthday,” Carl recalled. “I think we both fell magically in love on the first evening because we had already talked extensively before the first date.”

They continued to get to know each other over the next several months. While the couple’s connection was undeniable, their dedication to their families and careers proved to be a huge hurdle in their relationship. Carl has two kids, is a local pastor and works for a lumber company; Shelley is a registered nurse and had five children and two grandchildren. With each so committed to the lives they’d established, neither were sure they’d be able to move.

The two briefly reconsidered whether their relationship would work out. But in the end, love won over circumstance.

“During that brief time apart, I learned how miserable I was, and started feeling not at home with my job and home life. It was a major eye opener that I was not listening and following where God wanted me to be.”

In the end, their time apart only solidified their desire to be with each other forever.

“I want to be very clear when I say that I have no doubts I will be with this man until the end,” Shelley said.

And from the separation, even more good emerged: each family gained another dog! By the time Carl and Shelley got back together, they had five bouncing Boxers between the two of them.

The pair decided to officially bring their family together at the end of last year. Carl recalled,

“We started joking, ‘Wouldn’t it be cool to get married on Christmas, you know, the greatest gift ever?!'”

So, they did! On December 25th, 2017, the two lovebirds — whose romance started on the iHeartBoxers fan page — tied the knot!

Carl tells us that their children are “avid animal lovers,” so they’re enjoying life with their pack of furry siblings! We bet there’s never a shortage of fun things to do at the Beck’s big household.

Although these newlyweds have found their happy ending, Shelley has a few wise words for the other “singles” who commented on the iHeartBoxers page.

“My best advice to them: know your worth and accept nothing less. My husband told me he will continue to ‘chase’ me throughout our marriage.”

“It’s the little things he does everyday, the sweet surprises for no other reason other than to make me smile and remind me [that he loves me]. I asked him once or twice, ‘Where do you come up with all this? You gotta have a dating book with tips of some kind.’ His answer was, ‘You’re right I do, you busted me. I go by the Bible. The Bible teaches me how to love you.'”

Special thanks to Carl and Shelley for letting us share their heartwarming story – and just in time for Valentine’s Day! If you’re a single dog lover looking for a mate, consider this: your pup may actually help you find your soulmate!