A unique new game called To The Rescue, has captured hearts with its goal of simulating an animal shelter environment, and bringing light to the reality of a shelter.  After just two days of being live, To The Rescue has already surpassed its funding goal on Kickstarter, and has started working its way into its stretch goals.

This game is made to raise awareness for shelters around the world, by providing as realistic scenarios as possible in the simulated video game. Little Rock Games knows that the only way to make a real impact on our shelter system is through education, so they wanted to create a simulation that involves the everyday workings of an actual shelter.

In this game, players will have to fight off infectious disease, keep their pups healthy, and find ways to earn upgrades to keep your shelter expanding. Animal shelters work heavily off the donations of their supporters, so this game even includes fundraising and search for donations. They thought of just about everything in this virtual animal world!

Of course, a huge part of this game is the joy of finding homes for your virtual furry friends. Just like in an actual shelter though, once one pup leaves, another one comes through the door. This simulator truly challenges the players to find a way to make it all come together, while raising awareness for just how much hard work goes into our shelter system.

Little Rock wanted to paint a realistic image of life at the shelter when they created this simulation, so they made sure to include one extremely tough reality; euthanasia. While it would be more pleasant to not include this painful factor, it would not give players the full picture. No one wants to face this truth, but in reality, it’s a part of the daily routine in most shelters around the world.

“No one ever wants to have to euthanize. But since we want to raise awareness, we don’t want to pretend that it’s not potentially part of the job.”

Euthanasia is presented as an important, but completely avoidable part of the experience. Players are encouraged to advocate for their animals and their work in effort to clear their shelter.

Once To The Rescue is officially launched, 20% of it’s proceeds are set to donate to actual shelters in need!

While this game may have some rough realities, it is helping to open the eyes of each player. Hopefully with the official launch of this game, we will have a new generation of active members in the animal community! 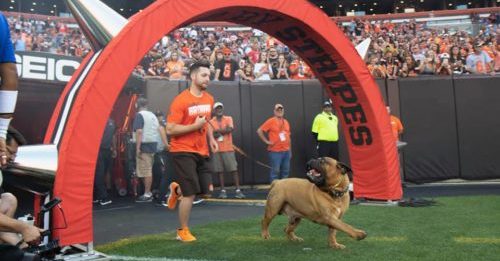 Cleveland Browns Doggie Mascot Dies At 6 After Battle With Cancer