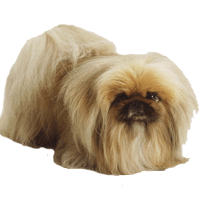 The Pekingese originated in China. Recent DNA studies confirmed that the breed is one of the oldest, and also one of the least genetically diverged from the wolf. Commonly referred to as the “lion-dog”, this dog could only be owned by members of the Chinese Imperial Palace in Peking. While raiding the Imperial Summer Palace during the Second Opium War, French and British troops discovered five Pekingese dogs. The British brought one of the lion-dogs to Queen Victoria, who named it “Looty,” because of how he was acquired. The popularity for the breed was immediate. Although, due to the rarity of the breed, only the upper class could afford them. It was first shown in Britain in 1893 and was recognized by the AKC in 1909. The Pekingese is still a popular companion and show dog to this day.

This breed is known for its notorious resemblance to a lion. Though it may not be the exact size of a lion, its features are certainly similar. It has a compact body, featuring heavier forequarters than hindquarters. The Pekingese has somewhat of a flat face with a ruff of fur around the neck. The ears are long and feature long straight or wavy hair towards the tips. The breed has a gait that is best described as patient and unique. It has an abundant double coat, lots of hair giving it the lion-like appearance. Its dense undercoat is soft and plush, while the outer coat is much coarser and straight or wavy. It stands off its body giving it a fuller, rounder look. This breed has long feathering on the ears and tail. It can be any color with or without markings. Although its nose, lips and outline of its eyes are usually always black.

It is independent and stubborn, feisty in nature and always courageous. These are some traits that also add to its reference as the “Lion-dog.” The Pekingese will voluntarily display behavioral issues to its owner, It will act so authoritative over you at times it will just completely stop eating to prove a point. It can also be difficult to housebreak, so firm training and patience is key. This breed is devoted and loyal to its family, even though it may not show it through affection at times. It is an active breed that is very playful with children, but does better with older kids who know their limits and will not tease or rough house them. It is known to not like to be disturbed while sleeping, and it should not be overfed due to an increased risk of obesity and numerous other health problems that go with it. The Pekingese does not warm up to strangers easily, and is known to bark. These traits make it a good candidate for a watchdog. It needs to be socialized with other pets as a puppy to avoid aggression, dominance and other behavior issues later down the line.

The Pekingese must be brushed daily to prevent the coat from matting or tangling. You must also regularly check its hindquarters, which may become soiled due to the abundance of hair. Dry shampoo often as opposed to bathing, and clean the wrinkles above the nose to prevent bacterial growth, rash or infection. Check its feet and coat after outdoor activities or walks for sticks and burrs, which may get caught in the fur. The Pekingese is an awesome choice for apartment living. It does not require a ton of physical exercise, however it does need some activity to prevent obesity or destructive behaviors. Some Pekingese do not like to be on a leash while walking, also most are known to behave better if on a harness as opposed to a collar. This breed cannot handle excess heat and can die of heat stroke, please take care in the warmer months and adjust indoor temperatures accordingly. It should not be expected to sleep or live outdoors. Because of its short muzzle and flattened face, this breed is known to snore sometimes excessively.