The police received a call from some good Samaritans regarding a dog who they believed was being mistreated in Greece. When cops arrived, they found a dog who seemed to be aggressive, but learned that he had spent his entire life on a chain and had a very a violent owner.

Theoklitos Proestakis, who runs Takis Shelter on the island of Crete, agreed to take in the aggressive dog. He is known for having a special knack of getting aggressive and scared dogs to become calm and trusting. 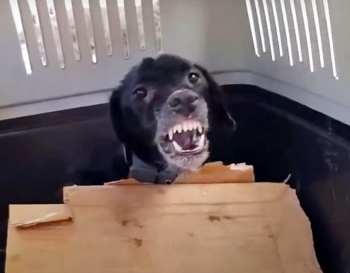 At first, this ‘aggressive’ dog, named Phoenix, did not want anyone to touch him. He flashed his teeth and would snap anytime anyone came near. But Takis refused to give up on him. 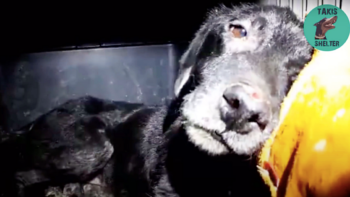 Phoenix was terrified, and all he was used to was getting abused his whole life, so he thought that every human would do the same things his mean owner did. Violence was all he knew and he was just trying to defend himself, like he’s had to do so many times.

Takis used a glove to pet Phoenix with, and wanted to show him what gentle human touch was and that he wasn’t going to get hurt ever again. Phoenix was still nervous and continued to snap at Takis. 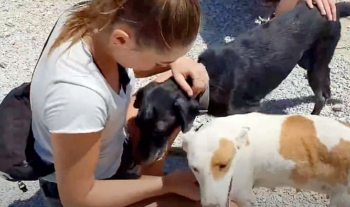 “We will try later again and we will be very good friends soon,” Takis said to Phoenix.

Phoenix seemed like he was a far cry from being friendly and accepting of human touch, but Takis was right. He was able to gain Phoenix’s trust!

Once Phoenix got a taste of gentle affection, he loved it. He finally gave in and rested his face in Takis’ glove. Now he couldn’t get enough attention.

This just goes to show that Phoenix was never the “aggressive” dog that he appeared to be. He was just a dog who was trying to protect himself from his abusive owner.

Watch this heartwarming happy ending of a story below! Be sure to pass this onto a friend or family member: