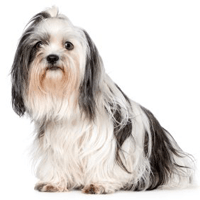 The Shih Tzu is a breed favorite of many and quickly becomes a family member.

Originating around the 17th century, it is assumed that the Shih Tzu was originally from a cross between the Tibetan Mountain Dog and the Pekingese. Known to be a “holy dog,” it was adored by Empress Dowager Cixi and is often portrayed in Chinese paintings. Similar to the Pekingese in both appearance and history, the Shih Tzu is distinguished by a topknot or bun of hair tied on the top of their head. The royal family owned many of these dogs during the Ming Dynasty, although when the British invaded, many of the dogs were lost. This caused a great setback to the breed. Initially, the Shih Tzu was referred to in China as the Lhassa Terrier or Tibetan Poodle, and later on, became known as the Lhassa lion dog. The Shih Tzu and the Lhasa Apso were both categorized as the Apso in England, which means “shaggy.” Later in 1935, they distinguished the dogs as two totally separate breeds. A single cross with a Pekingese was permitted in 1952 to improve the standard, which was recognized in 1969 by the AKC.

This dog holds its head high with pride, and its tail curls over its back. It is a compact dog with a long, silky double coat. Though it is classified as a toy breed and functions solely as a companion nowadays, it should still be of sturdy build and follow the standards for its breed. Its expression is often wide-eyed and offers a feeling of faithfulness and friendliness. The Shih Tzu’s coat is normally long, dense, and straight in a large variety of colors.

This dog as a spunky personality loves to play and have fun and does get along with older children and other pets. Despite its small size, this dog has a large personality and can sometimes bite off more than it can chew. The Shih Tzu naturally expects to be treated like a prince or princess and is easily spoiled. Because of this characteristic, it tends to be jealous of babies and toddlers, and other pets. If not trained properly, the breed can become timid, noisy, overprotective or snappy.

The Shih Tzu may need to be brushed as often as every day for a half-hour at a time in order to remove knots and prevent matting in their luxurious coat. Clip away any matting or tangling in between toes, and bathing once a month is suggested. Puppies need to be trained to accept being groomed. They can exhibit very displeased behavior during the first few bathings, but this phase must be passed. Bathing is a lifetime requirement. Because it is a very small breed in size, its exercise requirements can be met with short walks on the leash or half an hour of a fun indoor game daily. Apartment life is suitable for the Shih Tzu, however, the noise can become a problem among your neighbors if not addressed, so training should definitely be considered to prevent it from any excessive, unnecessary barking. It doesn’t adapt well to humid weather and must be kept to live indoors. This is not an outdoor breed. The Shih Tzu can be hard-headed due to its independent and proud nature, so training will require patience, a firm hand, and consistency.