Last week, a disabled Husky mix named Zorra was left in the backseat of a car that was stolen. After news spread about her disappearance, everyone prayed that Zorra was safe.

Unfortunately, the stolen vehicle was found with Zorra deceased in the back seat. This discovery was heartbreaking for her mother, Wanda Ferrari, but luckily, the person responsible has finally been located.

Ferrari had left Zorra in a rental car with the AC running for just a few minutes, and when she returned, the car was stolen with Zorra inside. The car was found several days later in a tow lot and sadly, Zorra had been left inside the hot car alone and sadly succumbed to the heat.

Ferrari is a breast cancer survivor that recently learned that her cancer has returned. It breaks her heart that Zorra will not be by her side to support her this time. Zorra had been with her for over 13 years, so she can’t even imagine what life will be like without her beloved dog.

Jephthe Jean Francois was found responsible for the stolen car and the death of Zorra. Surveillance footage was found of Francois approaching the vehicle and climbing inside. He was actually on a pre-trial release for an unrelated crime, so authorities were able to use a court-ordered GPS tracker to locate him.

Francois was faced with a total of 15 charges, including grand theft auto, animal cruelty, and many more. He appeared before the judge on Thursday morning. Video footage of him in court can be viewed here.

“She was with me with my first battle with breast cancer and I was hoping she’d be there for the second,” said Ferrari. “She’s my rock. She’s my heart. I rescued her and then she rescued me and I really need her now.”

How Can We Help Zorra’s Mom?

100+ Abandoned Dogs of Everglades Florida has been following this case very closely. They want to do everything they can to help Ferrari, and they strongly believe that Francois should get the maximum punishment for what he did.

In a live video on 100+’s Facebook, they explained that Ferrari was on her way to look for a new apartment when she had Zorra in the car. Therefore, she is still looking for a place to stay and she can use all the help she can get. If anyone has a means of helping her or knows of a place she could stay, please contact 100+.

No dog parent should have to go through what Ferrari went through and no dog should have to suffer the way Zorra did. What this man did was unforgivable and he should be faced with the worst possible punishment for his actions. 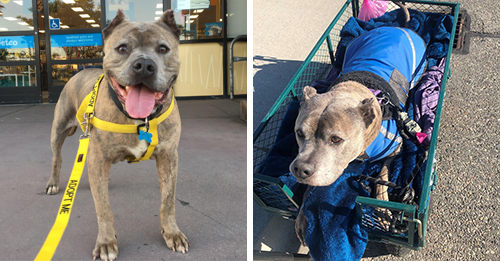