Man Honors Late Dog By Rescuing A Senior Pup… Now He Has A Whole Pack!

Steve Greig, who lives in Colorado and works as a full-time accountant, knew that the only way to recover from the loss of a dear old furry friend was to give another one a loving home.

Little did he know that this act of love would grow into something much bigger!

As a child, Greig’s parents taught him to love all animals.

“I grew up with a lot of pets,” he told The Dodo. “Both my parents were animal lovers and they pretty much always let me have whatever I wanted as long as I could take care of it.”

As an adult, he continued having pets at home. But it was one pooch in particular — a Miniature Pinscher named Wolfgang — that inspired him to welcome hard-to-adopt animals into his life with open arms. In a story by the Dumb Friends League (DFL), he recalled:

“I was miserable because [Wolfgang and I] had been so attached, and then one day I had a thought: If something good could come out of Wolfgang’s death, something that wouldn’t have happened while Wolfgang was still alive, then that could be my homage to him. So I decided to adopt the oldest, least-adoptable dog I could find.”

That pup was Eeyore, “a 12-year-old Chihuahua with a heart murmur and four bad knees,” Greig explained to The Dodo. Up until that time, Eeyore was one of the “least adoptable” pets at the local shelter. But for Greig, the pooch was the inaugural member of his senior pack.

“In a house of so many dogs these two are probably the tightest. One is never far from the other. They are little, fierce survivors with a lot of love. Eeyore and Englebert.”

Between rescuing and “acquiring” a few other wayward animals, Greig is now the proud dad of 9 senior dogs, a rabbit named Stewart, and a house-trained pig named Bikini! He’s also got a menagerie of ducks, chickens, and a couple cats.

“Back with the pack…..Bikini the pig, Waylon, Doris, Loretta, Edna (feeling like her old self), Edsel, Eeyore, Stuart the rabbit, Englebert, Melvin, Betty (the chicken?), Enoch.”

While having a house and yard full of pets may sound like a dream come true, Greig knows it’s all possible thanks to his good job, large property, understanding roommate, and housekeeper that help him care for so many pets.

Needless to say, Greig’s pack of pooches — plus a pig — is quite a wolf gang!

“I’m up front about all the dogs when guests come to the house. But I keep the pig secret for an element of surprise.”

While the doting dad has his hands full with responsibilities, vet appointments, and making customized meals for each pooch’s dietary needs, he says that he can care for so many dogs because they’re so laid-back in their mature age.

“They pretty much just eat, sleep a lot, watch TV with me and go on little walks,” he told the DFL. “They don’t require as much attention as younger dogs, so they fit into my lifestyle much easier. I think everyone should consider adopting a senior; they have so much life in them and so much love to give.”

“I play many roles for these dogs; companion, dog food distributor, dog walker, chair…. Hercules is 18 and although he actually gets around great, by dinner time his back legs are a little fatigued so I lend him a hand.”

“Enoch is an Irish wolfhound and I’ve had him since he was a puppy, before I started rescuing senior dogs and before I had come to completely face the horrible reality of shelter dogs…If you have your mind set on a particular breed there are rescue groups for almost every breed that exists. But please don’t close your mind to just one type of dog. “

This four-legged (and furry, and feathery) family has earned quite a fan base on Instagram! Over 770,000 followers love seeing the gang’s antics and reading Greig’s hilarious and heartfelt commentary.

In addition to saving the lives of his beloved pack of pets, Greig uses the family’s internet fame to promote senior dog adoption and advocate for good causes. He even has a T-shirt line that benefits Susie’s Senior Dogs, a nonprofit organization that specializes in rehoming pups in their golden years!

Do you have a senior dog at home?

That is why we created a monthly newsletter just for senior dog owners curated and written by knowlegable Veterinarians and experts.

It is very insightful, educational and FREE to all senior dog owners. 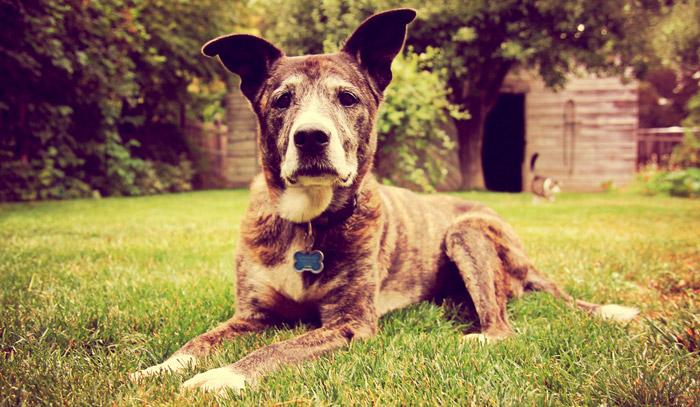 Thank you! You are now part of our growing senior dog owner monthly newsletter!
[X] CLOSE