When a student yawns during a long lecture, you know they’re either bored or tired—or both. But what about when your dog yawns? When your dog opens his mouth wide in the middle of a training session or when you’re about to go on a walk, being bored or tired doesn’t make sense. It looks like they’re blowing you off, and it’s natural to think, “How rude!” But before you take it too personally, remember dogs and people aren’t always the same.

It’s natural for dog owners to assume their pets do things for the same reasons they do. When it comes to yawning, however, that’s not the case. You’ve noticed the disconnect between your dog’s yawns and their fully awake and alert demeanor, and knowing what the behavior really means will help improve communication, training, and your overall relationship. Here are a few reasons that could explain your dog’s yawn. 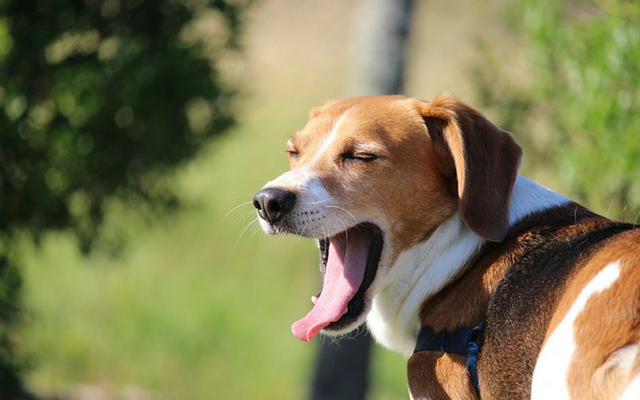 While a person yawning during a meeting is considered an insult to the speaker, a dog’s yawn could be interpreted as a compliment. Active dogs tend to yawn when they’re especially excited about what they’re doing or what they’re about to do. In an article by K9 Magazine, Jasmine Kleine says,

“By yawning, the dog is preparing its body for the action. The deep breaths fill the lungs and boost the flow of oxygen to the brain. This also increases the heart rate. “

So when your dog sees you grab your jacket and the leash, they know they’re about to go on a walk. Their yawn doesn’t mean they’d rather stay home and nap, it means they can’t wait to go exploring. When you dawdle putting your shoes on or interrupt your routine to answer the phone, your dog’s yawn could indicate their impatience and anticipation. They’re basically say, “Let’s go already!” On the opposite side of the spectrum, yawning can also indicate negative emotions like stress and anxiety. This kind of yawning is most often accompanied by other forms of tense body language. Flattened ears, lip licking, wide eyes, and tense muscles are all further indications a dog is uncomfortable with the current situation. People resort to nervous habits like nail biting and foot tapping when they’re stressed, and a dog’s version of that is to yawn. Correctly interpreting a yawn as a sign of stress will give you a heads-up that something isn’t quiet right. You can take appropriate steps to relieve the situation and stop it from getting worse.

Another explanation to an oddly timed yawn is that the dog is confused and doesn’t know what else to do. This happens a lot during training sessions. The dog’s owner gives a command, but the dog isn’t sure what they want. The more the owner repeats the command, the worse the situation gets. Their jaw-cracking yawn isn’t because they’re bored with the lesson or about to fall asleep. It’s because they know they’re expected to do something, but they have no idea what it is. Reducing the pressure of the situation and moving on to a command the dog definitely knows will help get the training session back on track. 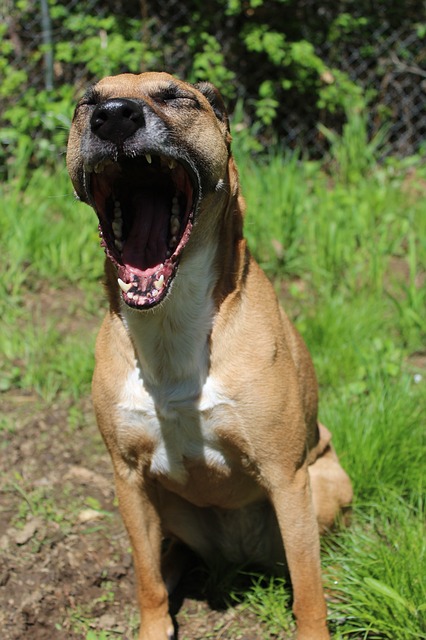 #4 – Communication With Other Dogs

Dogs communicate with each other in several ways, and “calming signals” are something they use upon introduction. Yawning is a calming signal, and so is averting their gaze, licking their lips, and walking slowly. When a dog displays one of these behaviors to another dog, it’s their way of being nonthreatening. All Dogs Gym and Inn says,

“This form of communication with a yawn may even be asking for a yawn in response as a way of saying, ‘I’m OK…are you OK?'”

Dogs use calming signals with each other, and dog behaviorists have also found them useful for interactions with people. When approaching a new dog, try yawning at them as a way of saying you come in peace.

No one knows how contagious a yawn is more than an employee stuck in a long meeting or a student pulling an all-night study session. All it takes is for one person to open their mouth for the entire room to be yawning uncontrollably. It works between people, and the same concept applies to dogs. The scientific evidence about why this phenomena happens is weak, but there’s no denying basic observation. A study done by British psychologists used the idea of contagious yawns as a way to determine if dogs are capable of empathy. What they learned about empathy is a lesson for another time, but they did determine dogs are as susceptible to the contagious yawn as people are. Try it out with your pup to see if it works.