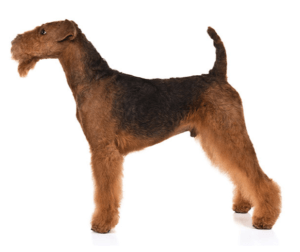 Brief History of the Airedale Terrier

The Airedale terrier sprang from Yorkshire’s Aire river valley, just a stone’s throw from the edge of Scotland. The wetlands there were home to the Otterhound, a tall, rough-coated breed named for its quarry. When crossed with the old English version of the Welsh terrier, the result was a tough, large black-and-tan wirehaired working terrier later dubbed the Airedale.

The breed’s handsome appearance did not go unnoticed. It was first exhibited in 1864 at a championship show sponsored by the Airedale Agricultural Society. That year, it was exhibited under a variety of names, including the Bingley terrier, waterside terrier, and rough-coated terrier. It wasn’t called the Airedale until 1879; it was formally recognized as such in 1886 by the Kennel Club of England.

Airedales were indispensable during World War I. Their duties in service were many and varied. They carried messages, killed rats, transported food and ammunition, and even moved casualties for the Red Cross. The toughness of these dogs became legendary, as they could endure incredible hardships and injury and still perform the task at hand. After the war, they became popular as family pets. Yet they still maintained working careers as police dogs, hunting dogs, and leader dogs for the blind.

The Airedale is a large, deep-chested breed with a long head and dark, snapping eyes. The ears are erect and fold over into a neat triangle. The dog has a fit, athletic appearance and is tan or reddish tan with a red or black saddle. The coat is rough and wiry with a soft undercoat, and it will grow wild if left untrimmed. The tail is usually docked.

The Airedale’s hunting instinct has never really left, despite generations of being a house pet. It has a natural herding instinct and has been used on working farms as a livestock dog. The dog requires training, as it can be an independent thinker, like most terriers. The Airedale is intelligent, fearless, agile, and playful. It makes a great working dog for agility or other dog sports.

The Airedale coat requires grooming. Most show dogs are hand-stripped, but pet owners find it sufficient to take the dog to a groomer every six or eight weeks.

The dog is energetic and requires some form of aerobic exercise daily. It can play ball or disc or be an excellent jogging or hiking companion.

The Airedale is a good choice for people who have allergies or prefer a non-shedding dog in the home.