An adventurous senior dog is safe thanks to the U.S. Coast Guard. Officers from the Fort Myers Beach station were participating in an off-shore training exercise last week when they received “a call of a pup in distress.”

Three crew members motored out to where the dog was spotted, and were able to pull him aboard. The pooch was tired, but unharmed.

Luckily for us, the sweet rescue was caught on video!

When the boat first pulled alongside him, the dog continued to paddle along unfazed. The Coast Guard officers angled the boat in an attempt to block his path, and two of the men were able to hoist him aboard.

The soggy dog landed in one of his rescuers’ laps and promptly planted a thank-you kiss on his forehead; followed by a hearty shake-off, dousing the poor chap in seawater!

“How are you doing, buddy?” one officer asked. “You’re the best person I’ve ever rescued.”

The guys snapped a selfie with their new pal before bringing him safely back to shore.

The Coast Guard proudly posted the photos and video across social media to recognize the guys’ good deed. The Facebook post reads:

“Thanks to the crew’s expertise in intercepting non-compliant vessels (NCV) and recovering a person in the water (PIW), our “star” of the night was safely recovered and returned to her owner! Amazing work Station Fort Myers Beach!”

According to the comments on the U.S. Coast Guard Facebook page, the dog was promptly reunited with his owner. 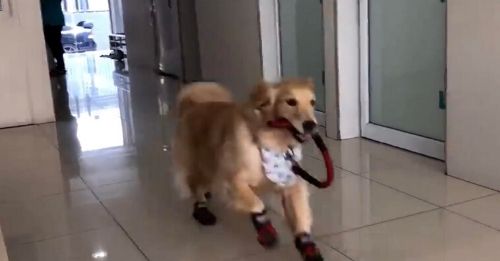