While dogs are generally considered pack animals, not every canine introduction will turn into a peaceful companionship. Some dogs generally don’t do well in social situations, and others are picky about who they choose to befriend. Whether you’ve added a second dog to the family or need your pup to play nice with someone else’s dog, encouraging an amicable relationship is in everyone’s best interests.

Like people, dogs have individual personalities that determine who they play best with. It isn’t possible to force two opposite-minded pups into becoming best friends, but there are ways to foster positive interactions. Building a bond won’t happen overnight, but through training, patience, and insight into the canine mind, you can help two pups learn to get along. 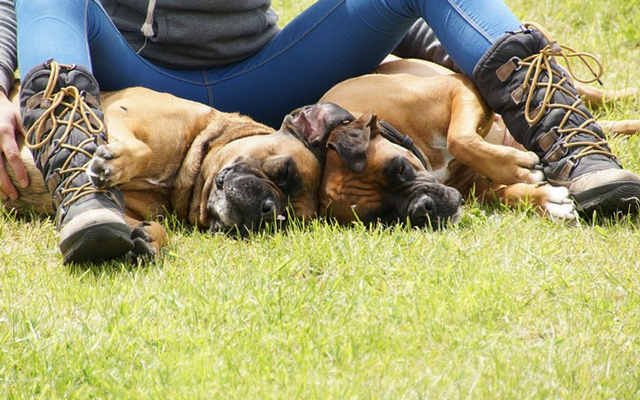 Before “Operation Dog Bond” kicks off, your strategy will depend on the type of relationship you want to build. Two resident dogs are dogs who will live together under the same roof for the foreseeable future. Families who decide to adopt a second dog want to fill their phones with pictures of doggy cuddles and videos of adorable play sessions. Sometimes the two get along right away, and sometimes they don’t. There’s a transition period for each pup, and learning to accept the company of another dog is easier for some than others.

Even if the second dog isn’t a full-time resident, there are situations when you need your dog to make a particular friend. If you have a family member, close friend, or neighbor who is also a dog owner, your human interactions will go smoother if the canines in the group get along. Maybe your friend visits you often and likes to bring their dog with them. Maybe you need a family member to pet-sit, and that means your pup needs to temporarily bunk with another dog.

While fostering friendship is the main goal in each of these situations, making it happen will require adjustments according to the specific circumstance. Not every dog is the same, and not every doggy friendship starts in the same way. Here are a few tips on how to encourage two dogs to bond. 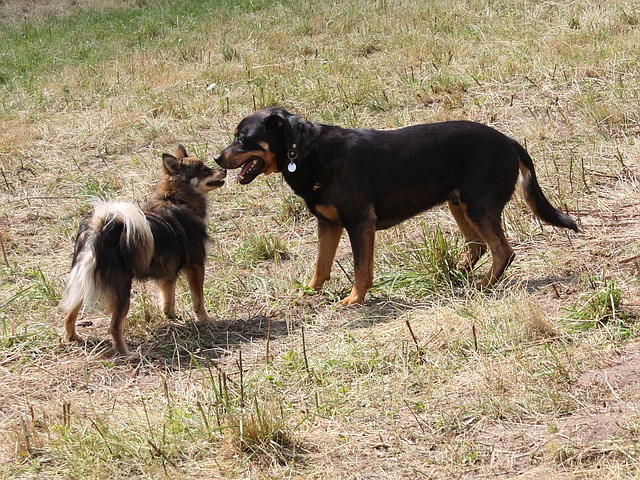 #1 – Start With a Proper Introduction

To encourage a good relationship right from the start, introduce the two dogs on neutral territory. Dogs tend to be territorial, and meeting in a house or backyard will give one of the dogs home-field advantage. You want their future friendship to be based on mutual respect, and choosing a location that is new to both parties will keep things fair. Animal Humane Society suggests taking the dogs on a leashed walk during their first meeting. They say,

“Throwing them together in the backyard and letting them work it out can lead to heartbreak, and occasionally serious injury, if the integration fails.”

Let the dogs sniff and introduce themselves in a calm setting, and then keep them several feet apart as everyone walks in the same direction. Let them become acclimated to each other without being forced to interact.

Like teaching your dog new tricks, the best way to convey a message is through positive reinforcement. When your dog greets his hopeful new friend with a gentle sniff and wagging tail, make sure he knows how pleased you are. Give both dogs equal amounts of praise without escalating the situation with too much enthusiasm. Speak calmly and avoid giving out treats in case the dogs compete for the food.

Victoria Stilwell encourages dog owners to use positive reinforcement as a way of “lessening a dog’s anger and frustration.” The best way to use positive reinforcement in this situation is to first establish it as a regular training method. If your dog knows from past experience that your praise and positive attitude means he’s done something good, he’ll carry that lesson over to other situations. Saying “good boy!” at a positive social interaction will be all the encouragement your pup needs to know good things will happen if he makes nice with his new friend.

For visiting dogs, most interactions will happen at a non-neutral place. One friend visits another at their home, and that means one dog is invading the other’s territory. If one of the dogs is territorial, that behavior will have to be altered before a reliable friendship can be formed. To keep the visiting pup from feeling overwhelmed by the unfamiliar environment, make a temporary space that’s all theirs. Bring their regular bed from home and set it up in a quiet place where they can go to be by themselves. Allow the resident dog to maintain their “spot,” and don’t force the dogs to spend every second of the visit interacting. The chance to decompress on their own is vital.

For households with two resident dogs, the idea of personal space becomes more important. They’ll be sharing a home, but that doesn’t mean they’ll react well to a shared personal bubble. Each dog should have their own area that is strictly theirs. They should have separate beds and crates and be allowed opportunities to be on their own. Spending too much time together can cause tension. Spend one-on-one time with each pup every day. Reaffirm their understanding that they’re loved without having to share or compete for your attention, While time apart is important, time spent together is what builds a friendship. Allow the dogs time to play together under your supervision, and don’t hesitate to join in. For dogs that don’t naturally start playing together, it’s the owner’s job to get things going. Start by leading a game of chase, tug, or fetch. They’ll start to associate fun and games with both you and the other dog. Keep the play from escalating out of control and always end each session on a good note.

When you’re not playing, allow other opportunities for all three of you to be together. Invite them both to cuddle with you on the couch while doling out equal amounts of belly rubs and head scratches. Walk both dogs at the same time (bring an extra pair of hands if the dogs are big), and include them both in joint training sessions.

When your dogs know what’s expected of them, they’re less likely to feel stressed about spending time with another dog. When they’re taught how to behave and how to respond, they’ll act with confidence—and confidence is a key ingredient in every dog-dog relationship.

While you’re encouraging your dogs to be friends, also continue to work on basic obedience. Ty the Dog Guy suggests focusing on “core behaviors” like stay, place, and down. These lessons teach impulse control and provide general instruction about what’s allowed to happen in the home and what isn’t.

The biggest thing to remember when helping two dogs learn to be friends is to have realistic expectations. If your dog is naturally shy or uncomfortable in new situations, it will take time for them to get used to the idea of another dog being around. If an interaction turns sour, pay attention to their behavior to pinpoint exactly what went wrong. Never force an interaction and don’t leave the dogs unsupervised until you’re completely confident in their behavior. If you’re patient and keep your emotions in check, you can help your dog make a life-long friend.