We’re all taught a growling dog is bad news, but what if your beloved pup starts growling during playtime? It looks like they’re having fun, but you can’t help but worry about their angry-sounding growls.

The truth is, dogs have several different kinds of growls. If your high-energy dog starts growling in the middle of tug-of-war or as you chase them across the yard, there’s usually nothing to worry about. Dogs have what behaviorists call a “play growl,” and it’s their way of telling you they’re having fun.

Dogs may be a different species, but they’re are a lot like humans. People yell and shout when they’re having a good time, and dogs do the same thing. Sports fans yell to cheer on their teams, kids scream with joy at recess, and play growling is a dog’s way of expressing their enthusiasm. They’re basically telling their playmate they’re having a good time and want to keep it going.

If you’re ever at a dog park and hear a dog growling while playing with another dog, don’t jump to conclusions. Dogs speak the same language, and they can tell the difference between a play growl and a threat. They know when their friend is happy, and they know when it’s time to back off. The journal Animal Behavior released a study in 2010 showing evidence that play growls are shorter and higher pitched than warning growls. It’s hard to discern the difference with average human ears, but it’s there. 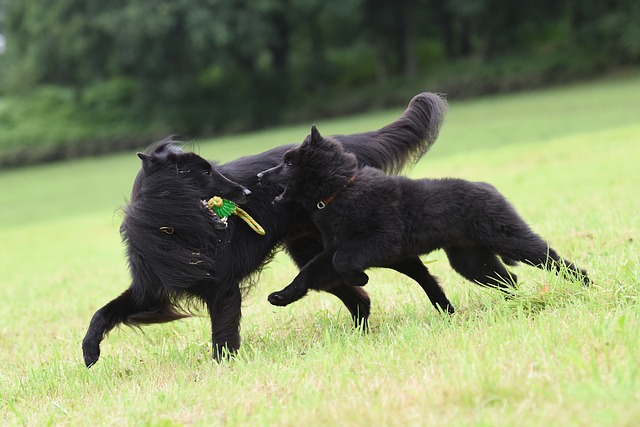 If all your dog’s growls sound the same to you, use context clues and body language to decipher their message. Look at their back and see if their hackles are raised. Next, move down their body to look at their tail. A wagging tail is a good sign, but a tail that’s stiff could mean trouble. If your dog seems to be overly excited or seriously fixated on you or whoever they’re playing with, it’s time to take a break.

While growling during playtime is normal for friendly dogs, even the most kindhearted canines can get carried away. A lot of dog play is centered around their predatory nature. Tug-of-war, chase, and wrestling are all games related to hunting and attacking. They’re harmless in a controlled environment, so it’s up to you to keep play from escalating into aggression. If your dog’s growling becomes deeper and more intense, take a quick break. Drop the toy, stop moving, and get their attention. Tell them to “sit,” “lay down,” or practice a new trick they’re learning to gauge their behavior. If they’re able to pull it together and calm down, go ahead and start playing again.

A dog you don’t know growling with their hackles raised and teeth bared is your cue to back down and let them be, but growling doesn’t always mean danger. When you’re playing with your best furry friend and they let out a string of growls, consider it a good thing. It means they’re having a good time, and they like having you as a playmate.