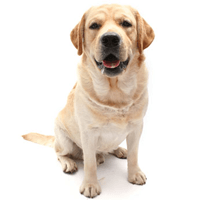 Labs are very skillful when it comes to retrieving game, both fowl and fish. The Labrador Retriever, commonly referred to as a Lab, is a type of retriever-gun dog. There had been a good amount of Labradors taken to England during the early 1800s. Thanks to these dogs, the breed continued to thrive. The breed earned a reputation for upland game retrieving during this period in Great Britain. The Lab is actually one of the most popular breeds of dog in the United States and the U.K. to date. Labradors are frequently trained as disability assistants, often times to aid the blind, those who have autism, to act as a therapy dog and perform screening and detection work for law enforcement and other official agencies. They are a prized sporting and hunting dog. The breed was recognized by the AKC in 1917.

The Labrador has a medium to large bone structure. It is a strong breed with a wide muzzle, as well as a broad head and neck. The ears are triangular and folded over. The eyes are usually chestnut or brown in color. The nose is normally black on the yellow and black varieties of Lab, and brown on the chocolate Labs. The gait of this breed is best described as free and graceful. This particular breed of dog is known for its resilient coat, webbed paws, and otter-like tail, which are all important traits for such a swimmer. The double coat is dense and short in length. The coat of this breed will be black, yellow, or chocolate only. No mixed colors. A very rare silver or gray color also exists, although that variety is surrounded in controversy and question. Some say that it is the result of mixing it with a Weimaraner, while others claim that it is a true color of the breed. The AKC actually refers to those unusual hues as a shade of chocolate. English Labradors are heavier and blockier in appearance, while American Labradors tend to be a bit taller and longer.

This breed is notorious for its mellow and relaxed demeanor, and also its friendliness towards children and other pets. The lab is an intelligent dog that wants to love and be loved. Not known to be aggressive or timid, this breed yearns for attention from its family and expects to be included in all activities. The Labrador loves outdoor activities, such as swimming and retrieving; but it is also a well-behaved house dog. This breed needs daily mental and physical activity, otherwise it may develop unwanted and destructive behaviors. It also should be exercised daily in order to keep it healthy in all other areas, its joints, its weight and its mental health. Sometimes known to be unsure of strangers or unfamiliar faces, this breed will make a good watch dog. Some Labradors have been known to make good guard dogs with proper training, but most are too friendly at heart. The English Labs tend to be calmer than the American Labs.

The Labrador Retriever has a short double coat that is relatively easy to groom. Like most other breeds, you should only bathe when it necessary to avoid stripping the skin of natural oils. The Lab should be brushed once or twice a week to remove any dead or loose hairs. It is known to be a playful, happy-go-lucky dog and it will require daily exercise to remain happy, comfortable and healthy. One of this breeds favorite activities is swimming, if you have a pool that would be a great source of exercise for your Labrador. This breed has a hearty appetite, food portions should be monitored so it does not eat to quickly or eat too much and become overweight later down the line. The Lab is capable and built to live outdoors, but it yearns for great amounts of human interaction so it would definitely be better to allow it open access to the home and family. This breed can live in an apartment if suitably exercised, although a home with access to a fenced yard is an ideal choice.