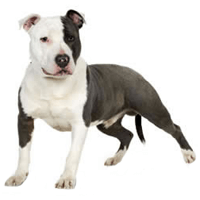 Stories suggest that this breed was a result of crossbreeding the Old English bulldog with the black and tan terrier. The result was the small to medium sized dog, that was born with agility, bravery and a set of strong jaws. By the time dog fighting was banned in Britain, this fearless and lean pup gathered a large following. Some enthusiasts continued to illegally fight their dogs, but most sought a legal way to compete. Efforts were soon made to produce a breed that would do better in the ring as well as be a more agreeable companion. The attempts were successful, and the Staffordshire bull terrier was recognized by the English Kennel Club in 1935 and by the AKC in 1974. It may have been bred a fighter, but it should not be misunderstood. This breed is full of love to give, and sometimes even tries to be a lap dog because it yearns for affection.

For its smaller overall size, this dog is quick and powerful. Its frame is wide and its body is toned and lean, which accounts for its firm stance and somewhat intimidating appearance. Its coat is short, sleek and dense and comes in red, fawn, white, black or blue, or any one of these colors with white; any shade of brindle, or any shade of brindle with white.

The Staffordshire Bull Terrier is lively, active and alert. It is generally good with children, although it may have the tendency to jump up on them. It so tolerant of kids that it has been called the “nanny dog”, because of its willingness to give its undivided attention to a child. This breed is normally good with strangers, but may exhibit some aggressive or domineering behavior towards other dogs. Although this dog will not seek out a fight, it will stand its ground if attacked or harassed. This dog is difficult to housebreak as a puppy and it has a very common tendency to chew on things.

An occasional brushing and a bath when necessary will suffice when it comes to coat care. This athletic breed needs plenty of challenging activity and exercise to maintain its firm, toned figure. This terrier should be kept on a leash in public areas. It can adapt to apartment life if it is given plenty of exercise. It does best as an indoor pet that has access to the yard. The Staffordshire bull terrier is easy to train, but can have a stubborn streak so patience and a firm, loving hand is key. Consistent socialization with other dogs and animals is highly recommended for this breed.