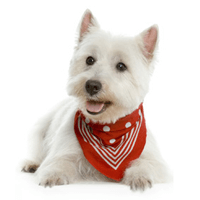 This breed was initially named after the town of Poltalloch, where they had been raised and bred for nearly a whole century prior to their first showing. Colonel E.D. Malcolm has stated that both his father and grandfather had bred these short, snow white dogs in 1916. It is suggested that Malcolm’s line of dogs dates back to the time of King James I. A few other names that the breed took on included Roseneath, White Scottish, little Skye, and Cairn. The name “Roseneath” is the name that the Westie was originally registered under by the AKC 1908. The name was later changed to “West Highland White Terrier” on May 31, 1909 but is more commonly referred to as the “Westie” to this day.

The Westie has a coarse, straight outer coat that protects it from the elements, and it is overall a small and compact breed. Its undercoat is fine and soft to keep it nice and warm in colder weather conditions. The fur is usually two inches in length and white in color, normally longer around the face. Its tail is fairly long for its size.

The Westie is a social dog that likes attention. It is playful, lively and at times stubborn. It is usually wary around strangers and doesn’t like rough play or being teased, which means this dog will do better with older and more mature children. It can be excessively timid or shy if mistreated. This breed love to bark and also has a tendency to dig holes while outdoors.

This breed is very social and loves interacting with its family or owner. It can live in an apartment if it is given daily exercise, but a yard would be ideal. Its wiry coat needs combing several times weekly with a monthly bath, to keep it looking clean and tangle free. It may be difficult to keep the coat white at times. Training is easy, and the Westie  is good at problem solving and challenges.