Brodie Moss is known for exploring the remote coasts of Australia and sharing his adventures on YouTube and Instagram. Of course, his adorable dog travel buddy, Stryda, makes his adventures even more exciting. She is very well-behaved on the boat, but it wasn’t always that way. When Stryda was just a young puppy, she became a little too curious during on of their boat rides, and her dad had to come to the rescue.

When Stryda was a puppy, she started riding on the boat with Moss. One day, Moss jumped into the water to get a look at some sharks. While he was swimming, he saw an animal also swimming in the distance. At first, he thought it was just an unusual fish, but as he got closer, he noticed that it was Stryda!

Stryda had jumped into the water once the people on the boat had turned away. The sweet puppy just wanted to be near her dad. She hadn’t realized how much trouble her adventurous nature would get her in.

After Stryda had jumped in, the woman on the boat began screaming at Moss, trying to tell him what had happened. As soon as Moss noticed that Stryda was in the water, he knew he had to think fast.

Moss said that as he swam Stryda back to the boat, she clung onto his back for dear life, digging her nails into his skin. The other guys that had been in the water with Moss were fending off the sharks as he swam his dog to safety. Luckily, Stryda made it to the boat without being harmed.

When asked what his scariest moment in the water was, Moss tells the story of saving Stryda from the sharks. He is grateful that his beloved dog is safe, but in the moment, it was terrifying for both him and Stryda.

Since this incident, Stryda has not made any more attempts to swim with her dad like that. She knows that what she did was a mistake and she would never dare try it again. This incident happened a few years ago, but to this day, Stryda knows that it’s safest to stay on the boat while her dad goes for a swim. 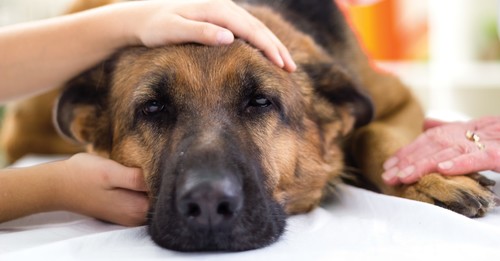