When people surrender their pets, the animals are left feeling sad and confused. But it can also be hard on the family who made this decision, which is often very difficult. What’s more, it can be especially heartbreaking for children.

This was the case for Rhino Lightning, a Boxer who was brought to the Humane Society of Utah last week. He came with a spiral notebook that was filled with a handwritten letter from a child who, without a doubt, is already missing him.

The 3-year-old pup was brought to the Humane Society of Utah because he is too high-energy. The organization’s spokesperson, Guinnevere Shuster, told Today that Rhino’s former family said he “​is unaware of his size. He wasn’t a great fit for the youngest children in the house.” It also must be noted that this was a very difficult decision for the family to make.

But the penciled note, written by one of the older kids and meant for Rhino’s new family, described how the pup has a softer side, too.

“He is a really amazing puppy,” it reads. “Rhino needs lots of attention. He loves people.”

“Rhino is a striped dream. His cheeks make a lot of slobber. Please tell Rhino that I love and miss him every night.”

Today reports that the child also wrote how Rhino is “a good dog and he loves cuddles,” and that he “loves to run around” but “hates snow & swimming.”

Aside from the useful information lovingly written by the child, shelter staff members have learned a bit more about the pup in order to help him find his forever family. He is anxious while in his kennel, but lets his happy, silly personality shine outside of it. He’s intelligent, potty-trained, and would prefer to live in a house without cats. He’d also do best in a family with kids that are at least 8 years old, and one of his favorite treats is peanut butter. And of course, he needs to stay active!

According to Today, Rhino’s new family will get a photocopy of the notebook. This way, they can learn more about their new four-legged family member, from the perspective of a kid who loved him — and is most certainly missing him now.

If you’re interested in adopting Rhino (aka Rhino Lightning), check out his adoption page and fill out an online application.

Share this story, and together, we can help Rhino find his perfect forever home! 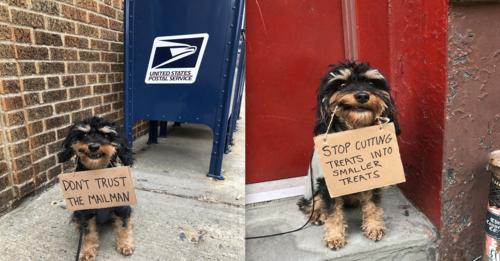