When Jo Jarvis hailed a cab to make her dinner reservation in Manhattan, she had not idea what was about to happen.

As she began to climb into the taxi, a stranger in an oversized coat approached her with an offer. Although Jarvis had no desire for pleasantries on the freezing cold night, his question captured her attention.

“Will you buy my dog, she’s $100?” he asked, peeling back one side of his coat to uncover a pair of big glassy eyes in a brown ball of fur. The pup was perched in the nook of his arm.

Shocked, the skeptical Jarvis wondered if the man was involved in some sort of illegal puppy trafficking operation, or if the dog had been stolen in some sordid attempt to make a little quick cash. But the stranger told her that all he wanted was someone to care for his Yorkshire Terrier; he was headed to jail in a few days.

Chilled, confused, and about to be late for dinner, Jarvis wasn’t ready to take custody of the dog at that moment… but she also couldn’t bear the thought of the pup’s fate if she didn’t. So she gave the stranger her phone number, and instructed him to call the next day if he still hadn’t found a home for the little dog.

The next afternoon, the stranger from the street gave Jarvis a call. He hadn’t found a home for his pet yet, and it seemed that she was his last resort. She agreed to take the dog, but on her conditions: the pup would be free, and he would have to deliver it to her home. That way, she’d know that the stranger’s main concern was heartfelt, not monetary–and she wasn’t going to be involved in some seedy black market puppy trade.

A couple hours later, Jarvis invited the stranger, named Jose, into her kitchen. While it crossed her mind that letting a convicted–whatever he did–into her home was risky, his honesty and apparent love for the innocent Yorkie, named Tiny, made him seem trustworthy enough. Jose explained that in two days, he would be pleading guilting in court, which would send him to incarceration on Rikers Island. He confided that this wasn’t his first visit there, but was absolutely certain that it would be his last.

Curious by profession and nature, a flood of questions surged into journalist Jarvis’ brain. However, at the time, her concerns were centered around how to care for her new pet: Was Tiny house-broken? Spayed? A picky eater? Well-behaved?

Now the questions that haunt her are about Jose: How would he progress? Would he really change, for the better? What did he do to get sent to jail? But there was one truth that she could see: the weight of regret in his eyes.

As the man–no longer a stranger–left Jarvis’ home, he asked if he could call, to make sure Tiny was doing alright. She told him that of course it’d be okay, and was reaffirmed of Jose’s genuine intentions. She added that, when he got out of Riker’s, he was more than welcome to pick up Tiny and take her back home with him…whenever that may be.

In the meantime, Jo Jarvis considers herself to be Tiny’s dog-sitter. She doesn’t know if or when Jose will be back, but for now, the pup is living a cushy and spoiled life with her foster Mama in her Brooklyn loft.

As of April 2016, Jarvis posted on Facebook that Tiny is doing great, and is still her furry companion!

Special thanks to Jo Jarvis for allowing us to share this incredible story and images, adapted from her article, “How I Ended Up Dog Sitting For A Prisoner.”

Couple Explores Nepal With Their Rescued Pup, Then Brings Him Home To The U.S. 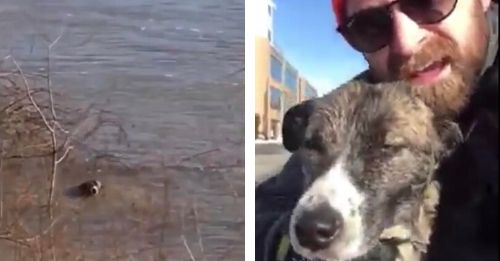