The saga of Hank and his Fuzzy Purple Hippo has taken social media by storm thanks to some brilliant marketing from Wisconsin’s Fox Valley Humane Association.

Hank is a burly chocolate lab with a serious crush on his favorite purple stuffie. When the hippo in question suffered near-fatal injuries, the eyes of the law – and the world – fell upon Hank as the prime suspect.

Read on for the full details of this epic crime drama. 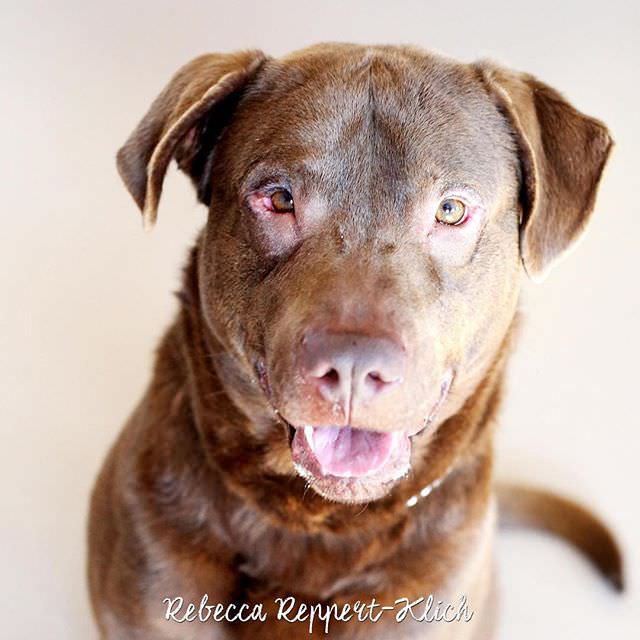 It all began with an innocent Instagram post from the shelter featuring Hank and his pretty purple pal. The caption read:

Hank and his purple hippo are a bonded pair, so if you aren’t ready for a 4 year old Chocolate Lab to come home when you adopt your fuzzy Hippopotamus…well, sorry, we can’t approve your application.
The hippo won’t let us get an age on her, but we don’t think she’s quite as old as Hank..They’ve been together a long time though. She IS spayed and current on vaccinations, but does seem a bit lethargic.
Hank is most definitely not. They do say that opposites attract….

Adorable, right? Purple Hippo and Hank were a shoe-in for adoption! But just three days later, a shocking update appeared on the shelter’s page. The fuzzy hippo had suffered a brutal attack!

UPDATE: The Fuzzy Purple Hippo, bonded with Hank, who we told you about last week has had a medical emergency. Dr. Laura is currently performing life-saving surgery to repair the near-decapitation. Details of the incident which caused the injury are murky, as Hank is refusing to answer our questions. (Yes, we have tried sternly asking, “what did you DO??” but he only looks away with a guilty look on his face.) Please keep the Fuzzy Purple Hippo in your thoughts. We will continue to keep you updated.

Warning: Some readers may find the following video footage disturbing!

Although Fuzzy Purple Hippo survived her injuries, she will clearly never be the same. She was left a “shell” of her former self!

UPDATE: Fuzzy Purple Hippo is resting comfortably (despite the cone of shame) back in her kennel with Hank this morning. She is groggy from pain medication and her demeanor seems a bit flat, but we are hopeful for a full recovery. Dr. Laura decided to leave her wounds open to allow for drainage and perform a full stuffing extraction to avoid future surgery (for Hank…shhhhh.) We will continue to keep you posted.

Hank’s close relationship with the victim made him the likely culprit, but he wasn’t talking.

UPDATE: Since yesterday’s casual questioning brought no results, Hank was brought in for a formal interrogation into the assault of his companion, the Fuzzy Purple Hippo. As of 11:00am Hank’s jowls remain firmly closed regarding the incident. 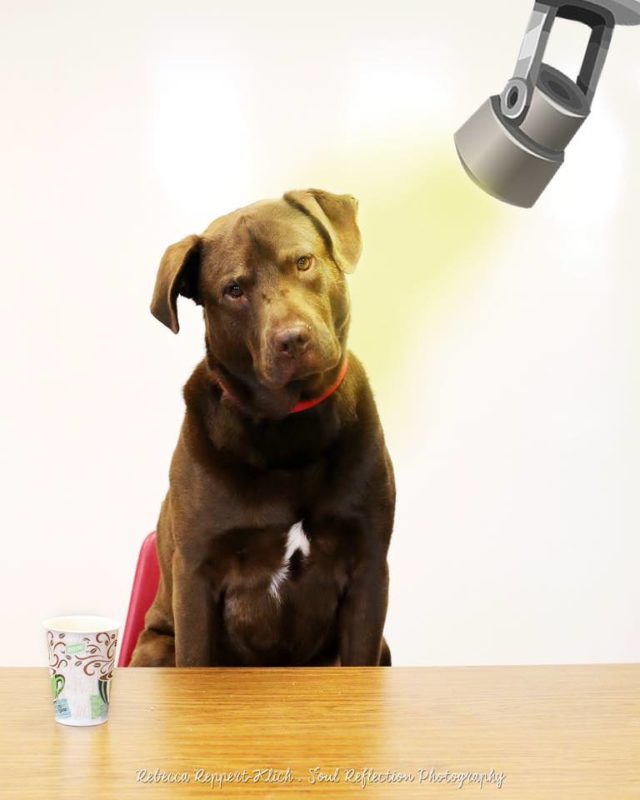 Meanwhile, Fuzzy Purple Hippo was encouraged to speak with a therapist to ensure her emotional wellbeing.

UPDATE: Fuzzy Purple Hippo met with a therapist this morning to discuss whether or not she feels safe in her relationship with Hank. Although their love for one another is very apparent, we want to be sure that there are no underlying issues and that she is not suffering from any emotional scars from her injuries. HIPPO laws prohibit her therapist from disclosing what she said in their session. …wait…we meant HIPPA laws, sorry. **Domestic violence and PTSD are serious issues. If you or someone you know are are suffering, help is available! The National Domestic Violence Hotline 800-799-SAFE PTSD USA Helpline 877-717-PTSD 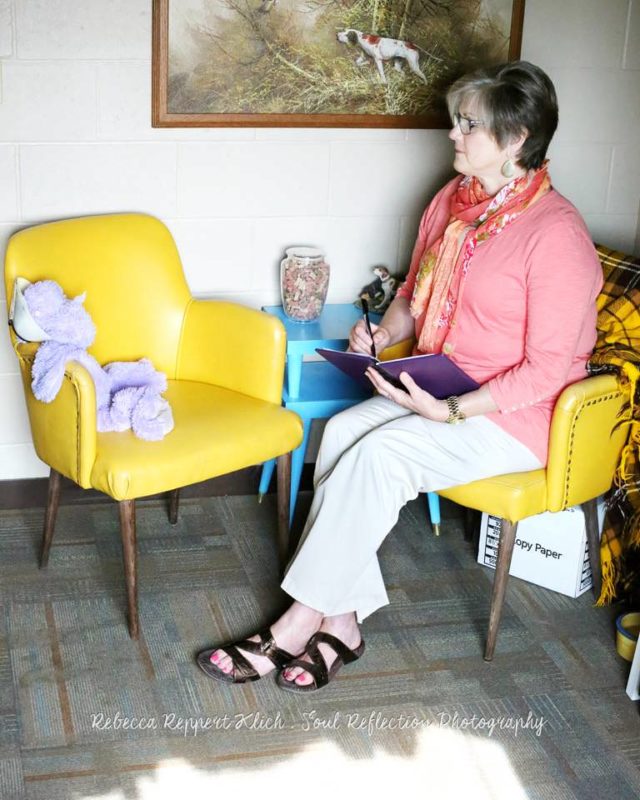 To preserve the rights of the suspect, Hank was assigned an attorney.

UPDATE: Hank met with his Humane Officer-appointed Attorney this morning to discuss the allegations of Hippossault. Although no formal charges have been filed, there are no other suspects at this time. His attorney has advised him to plead the 5th. 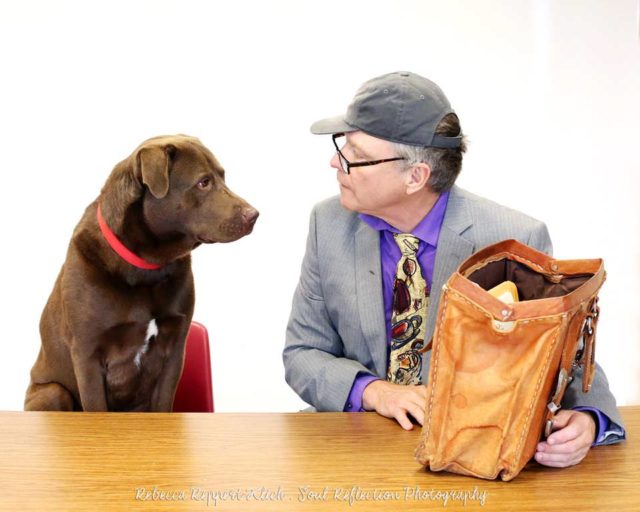 Despite the overwhelming evidence against him, supporters surrounded the shelter and the “Free Hank” movement began.

Fearing for the safety of their own stuffed friends, the other shelter dogs cried out for justice, leaving the staff no choice but to call in a paw-fessional to investigate.

UPDATE: Chief Thomas, of the Appleton Police Department, and K9 Blue (APD’s Therapy Dog in-training) came to FVHA this afternoon to examine evidence found in Hank and the Fuzzy Purple Hippo’s kennel. We are confident that with the exceptional investigative skills of Blue and the Chief, the case of the Hippossault will be closed soon. A formal announcement from the chief has been scheduled for tomorrow morning. 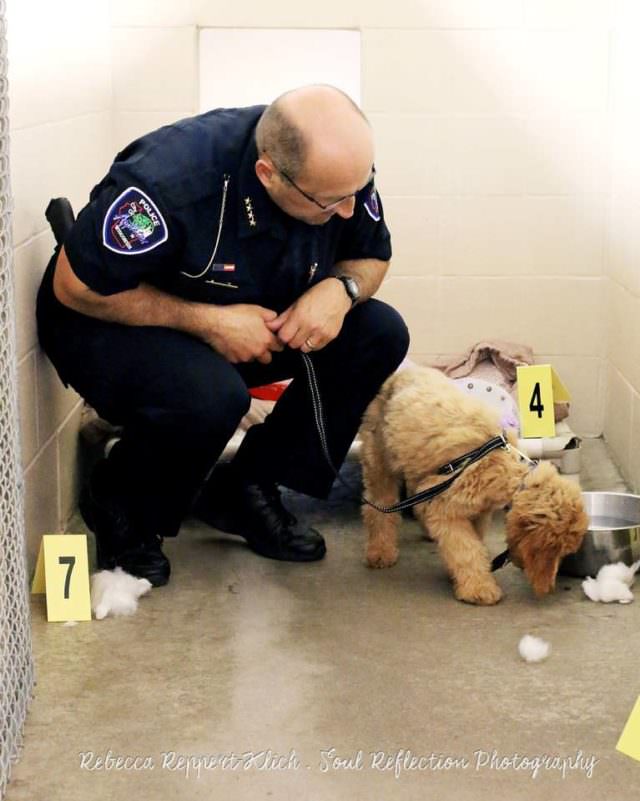 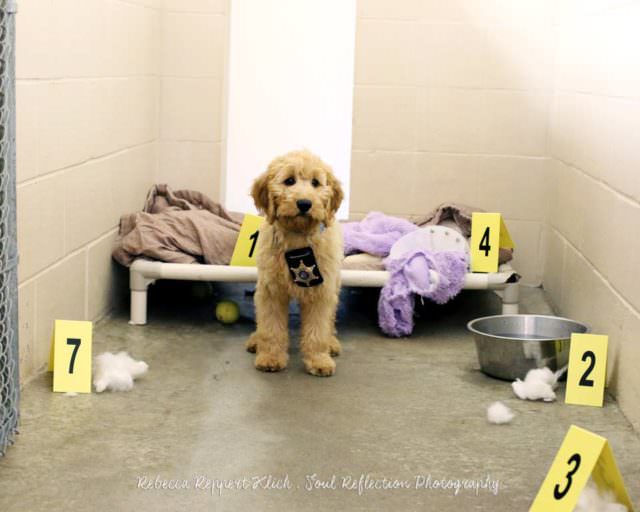 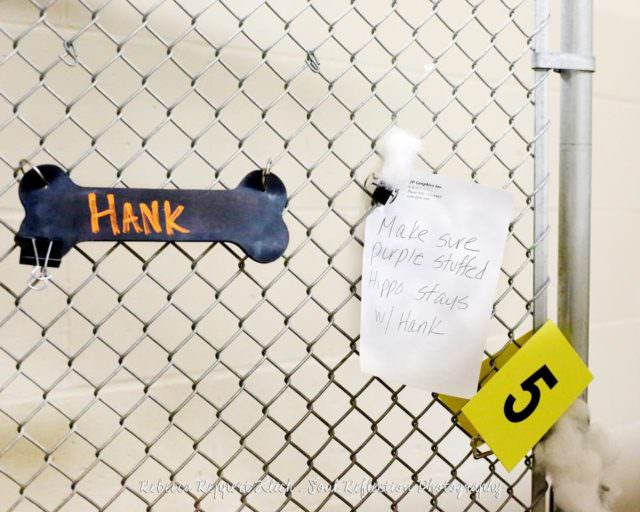 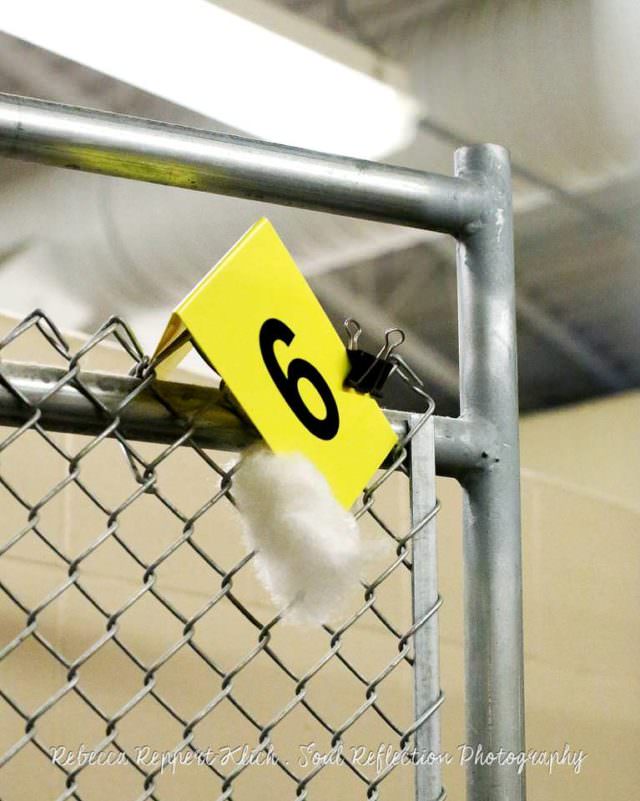 After a thorough review of the facts…

APPLETON POLICE CHIEF THOMAS RELEASES OFFICIAL STATEMENT REGARDING FINDINGS OF HANK’S INVESTIGATION The evidence, as well as information garnered from discussions with Hank and his attorney and the Fuzzy Purple Hippo and her therapist have brought the full story to light. Hank is not only INNOCENT, but a hero! Read the full, sometimes hard to read yet deeply romantic account of the events leading up to the discovery of the tragedy on our Facebook page later this morning.

After a gruelling investigation, Hank was exonerated of all wrongdoing! The official cause of Purple Hippo’s injuries tell a moving story of love, danger and devotion!

On the evening of Monday, July 10 after FVHA staff had left for the night, the Fuzzy Purple Hippo attempted to scale their kennel door. Having opposable thumbs (a design flaw at the stuffie factory?) she believed that she could open the lock if she got to the other side, then free Hank as well. The pair planned to grab a few treats from the box that they stare longingly at all day from their kennel, snag a comfy blanket from the cart in the hall, then head out to the backyard to snuggle and stargaze. The romantic night of their dreams…
…things, as you may have guessed, did not go exactly as planned…
Fuzzy Purple Hippo made it to the top of the kennel door with the sort of grace and finesse not typically seen in a hippopotamus, and Hank saw his periwinkle angel in a whole new light. His big chocolate heart thumped an extra beat.
As quickly as his heart had soared, it crashed…when her silky fur caught on the wire at the very top of the kennel. His heart wrenching howl could be heard throughout the shelter as she struggled to free herself but could not. Hank slid his bed to the door, made a mountain of his blankets, and climbed atop it all until he could stretch high enough to rescue his damsel in distress.
Hank cared for his princess throughout the night until the staff arrived and Dr Laura could perform the life-saving surgery that she needed.
Why did he not just explain what happened from the beginning and avoid the speculation and accusations, you ask? That’s exactly what we wanted to know! Hank said that he was scared that the Fuzzy Purple Hippo would get in trouble for trying to get out of their kennel and he wanted to protect her. He was willing to go to prison to keep her free and able go to a good home.
What about Fuzzy Purple Hippo, you ask? How could she let Hank take the fall? She couldn’t. She was so heavily medicated after her surgery that she didn’t understand that Hank was in trouble. Hank kept telling her that everything was going to be just fine and that she should just focus on healing. It wasn’t until she spoke with her therapist, then saw the police dog in her kennel, that she knew that something was very, very wrong.
Fuzzy Purple Hippo explained the entire series of events to Chief Thomas and K9 Blue, who confirm that her account matches the evidence found at the scene. **see evidence markers 5 and 6 in the crime scene photos from the last post** Hank and Fuzzy Purple Hippo have now waived their confidentiality agreements with their attorney and therapist, and both professionals have confirmed that their clients’ descriptions of the tragic event match, as well. The only discrepancy between the two stories is one which will forever boil down to a matter of he-said-she-said… Both Hank and the Fuzzy Purple Hippo are insisting that the other is the hero in the incident. She for her bravery, spirit, resiliency, and love, and Hank for his daring rescue, ingenuity, loyalty, and heart.
Now that the case has been closed, Hank has been cleared, and the Fuzzy Purple Hippo has made a full recovery, they are free to go….and we are thrilled to announce that they have just been released into the custody of a new family!!! Yes, they’ve been adopted!! 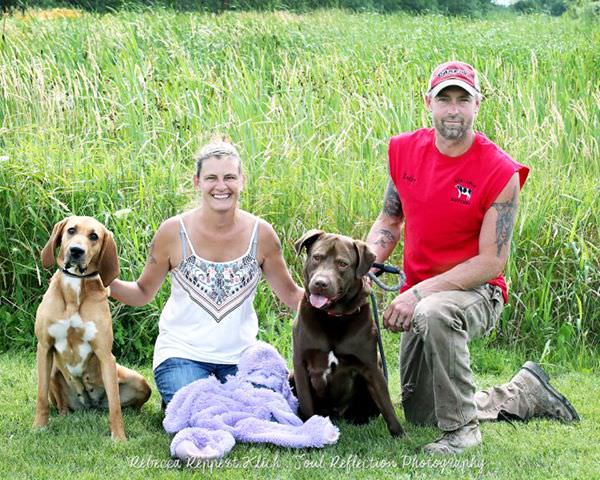 Hank and Fuzzy Purple Hippo may have found their forever homes, but the Fox Valley Humane Association still has plenty of adoptable cuties left – each with his or her own story!