A short video clip of a mother cat, seeming to introduce her puppy pal to her one-week-old kitten, has caught the attention of almost two million people. It’s definitely understandable why. Interspecies friendships are incredibly heartwarming to behold, and the clip is absolutely adorable.

When watching the actions of the cat, it’s almost as if she is asking and then showing the watchful dog how to be gentle with her baby.

The clip opens with the dog sniffing the kitten as the mother cat curls up against his face. It is obvious that they have already formed a strong bond. As the dog moves its nose closer to her kitten, the mother cat tenderly touches his face and then gives it a kiss. They even touch noses! This makes it appear like she is asking her canine companion to be gentle with her kitten.

Then, the dog lightly nudges the mama cat with its nose, suggesting that the dog is saying, “I understand.” The mother cat then reaches out to touch and kneed her kitten, as the dog continues to keep a close eye on the new baby. Quite a few comments on social media sites express surprise that the cat is so trusting of her puppy pal.

The person behind the camera had impeccable timing to capture such a sweet moment on video. But experts agree that introductions between dogs and cats are more likely to go smoothly when supervised and taken slowly.

“A slow and steady introduction will always win the race,” says Jackson Galaxy, a cat behaviorist known as the “Cat Daddy.”

The key to introducing your dog to a new cat is preparation. First impressions matter, and being properly prepared can help create a positive interaction. The first step after deciding that you’re ready to introduce your dog to a new cat is to make sure that your pup is properly trained. The commands “Down” and “Stay” are especially helpful during a first meeting. This way, you are better able to control the situation. 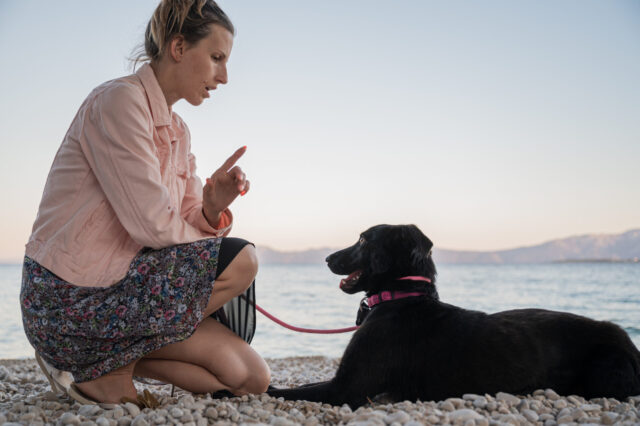 Provide the cat with a safe space that is high and out of reach of your dog. This way, the cat is able to observe their new domain from a place where they feel safe and comfortable. The photo below has the cat too accessible to the dog. Your cat’s safe space would need to be a bit higher. Also, create a “base camp” for your canine. They, too, need a place where they can escape and feel safe. 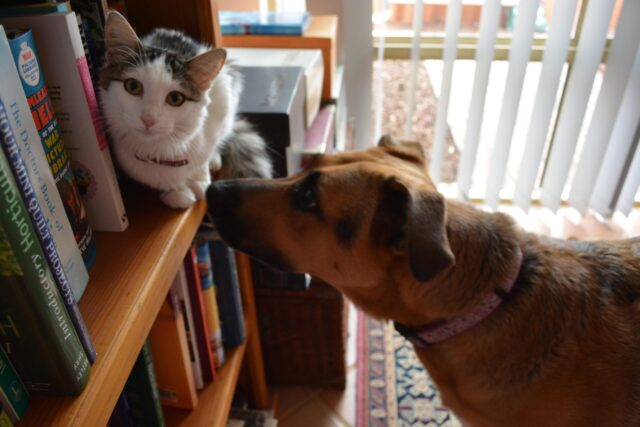 Dogs and cats can be instant friends, or it can take a while for them to get to know each other. It is incredibly important to be patient and to proceed slowly. Do not try to “force” anything between them.