While some dogs peeve their owners with picky appetites, most are happiest when scarfing down everything that looks remotely edible. It doesn’t matter what they eat, how much they eat, or when their last meal was, these chow hounds never seem to be satisfied. They’ll break out the hungry eyes at every chance they get, and it’s natural for dog owners to feel concerned about their pets’ seemingly insatiable appetites. But no matter how much they whine and beg, most dogs that live in a home with regularly provided meals aren’t actually starving. They act like it, but canine behaviorists have pinned a few possible explanations to the behavior. 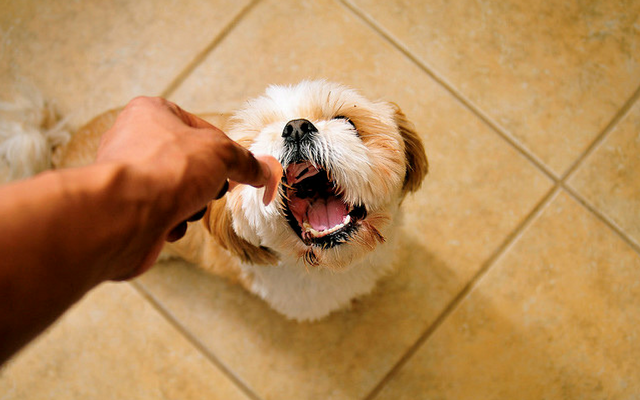 Before you start worrying about whether or not your dog is actually hungry all the time, figure out if you’re feeding them enough. There is no universal rule that tells you how much you should be feeding your dog. The number of cups you dump into their bowl depends on the type of food and the dog’s activity level. If your dog is your everyday running partner and rarely stands still, they’ll need more calories than a dog of the same size that spends their days on the couch. There should be a useful chart with recommended serving sizes on the back of the dog food package, and ask your vet how to alter that number based on your individual dog’s needs.

For reassurance that you’re not skimping on your dog’s meals, check out their physique. It will ultimately depend on your dog’s breed, but the general rule is you should be able to feel their ribs but not see them. When you stand over your dog, they should have a visible waist that narrows below the rib cage. If you have to dig into their sides to find bone or lose your fingers in several centimeters of squish, the gravy train has been running a little too long; your dog is definitely not starving.

If you’re feeding them right and they don’t look underweight, here’s a few explanations that could explain their greedy behavior.

Descended from wolves, your dog’s ancestors learned to value food as a limited resource. They hunted in packs to take down big game, but eating when they were hungry was never a guarantee. If they found food, it was best to eat as much as possible because they never knew when they’d get the chance again. 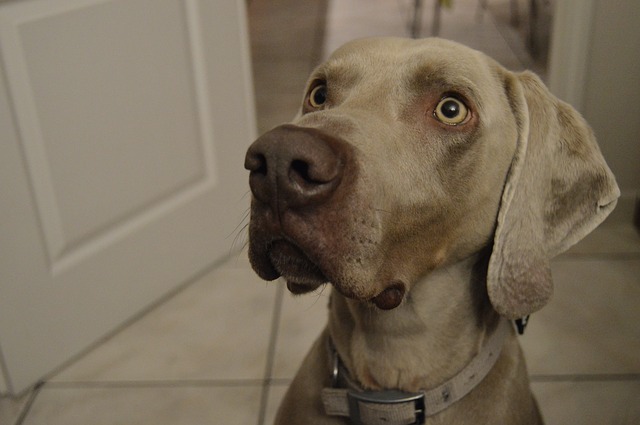 Your lazy Labrador probably gets fed like clockwork every day, but the idea that food isn’t guaranteed is an ingrained instinct for dogs. They’re opportunists listening to their guts. And their guts are saying, “You better eat now or else it’ll be too late.”

The dog that has lived in a loving home its entire life has probably never had to go more than a few hours between meals, but that’s not the case for every pet. Many rescues that get pulled off the streets and put up for adoption know all too well what it feels like to be hungry. They’ve experienced the real threat of starvation, and it’s a feeling they’ll do anything to never feel again.

If your big eater is a stray you recently rescued, their gluttonous appetite could be a lesson learned from past experiences. They’re still getting used to the idea that they’ll never have to scrounge for food again.

Experts believe the first domesticated dogs came from wolves with exceptional abilities to manipulate humans into giving them food. They learned the best strategies for how to get what they wanted, and your 21st-century pup has learned a few things of their own.

No one knows better than your dog that puppy dog eyes are impossible to resist. They’ve learned that if they look at you in that special way and follow you around, you’ll eventually cave and drop that last bite of sandwich into their mouth. They don’t want that dry kibble you put in their dish—they’re after the good stuff. Cheese, chips, cookies, oh my! By giving in, you’re teaching your dog that the hungrier they act, the better their chances are of scoring top-shelf treats. 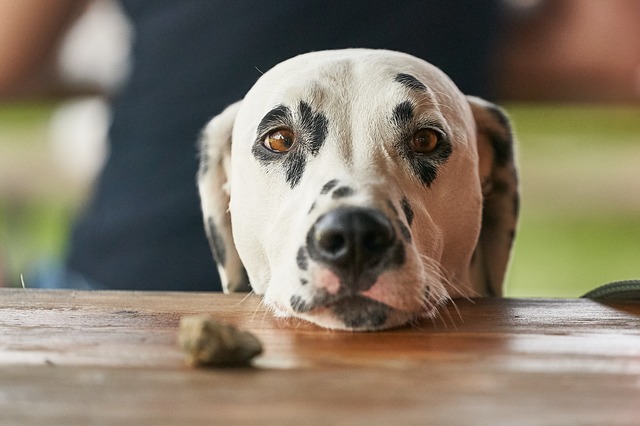 Your dog’s need to feed is most likely natural, but there’s always the possibility it could be related to an undetected medical condition.

Diabetes: Like in humans, diabetes is a condition that effects the production of insulin. Without insulin, the body can’t handle the intake of sugar. Dogs (and people, too) need sugar for energy. If they’re not getting enough, their cells will trick them into thinking they’re still hungry as an instinctual hunt for more sugar.

Hyperthyroidism: While relatively rare in dogs, hyperthyroidism can cause sudden increased appetite. Healthy Pets describes the condition as,

“Hyperthyroidism means the glands are working overtime, secreting too much hormone, which causes a constant state of metabolic hyperactivity. animals with the condition typically lose weight despite being constantly hungry…”

Internal Parasites: No one wants to think about their dog having worms, but it’s a common problem for canines. Roundworms in particular can cause changes in a dog’s appetite. They live in the digestive tract and feed off the dog’s nutrients. Their hunger isn’t an act, because the worms are filching their food. Diarrhea and other signs of digestive upset most often accompany parasite-related appetite changes.

As long as your dog exhibits no obvious medical symptoms while they’re staring longingly at every scrap of food and stalking everyone who enters the kitchen, you’re most likely dealing with an average chowhound. There’s nothing wrong with a dog who always wants food; it’s one of their quirky personality traits we learn to love. But whatever you do, don’t let their begging fool you. Overfeeding can lead to several serious health issues.