A dog’s quirky behavior can be entertaining to watch, and sometimes it’s about nothing more than them expressing a unique personality. Other times, however, there’s an underlying issue leading them to do seemingly strange things. One of those things is licking the air.

A dog that licks the air sticks their tongue out of their mouth and appears to lap up imaginary liquid. They’re not licking their lips like how some dogs do after dinner or when they’re nervous—they’re literally licking the air. There are a few reasons why dogs exhibit this strange behavior. Here are a few possibilities. 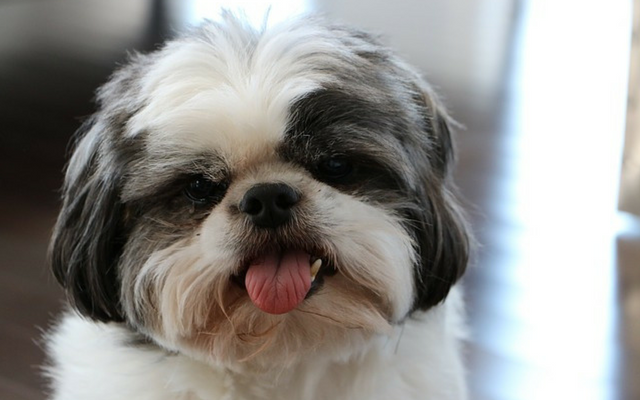 1. There’s something stuck in their mouth.

Imagine you just finished snacking on a peanut butter sandwich and now you have it coated to the top of your mouth. You’re going to do some serious acrobatics with your tongue to try and get that stuff off. Dogs do the same thing. They can’t use their fingers to pick things out of their teeth, so they use their dexterous tongues.

If it’s a case of peanut butter coating your dog’s teeth or a stray piece of kibble caught in their lip, their strange tongue action won’t last long, and there’s nothing to worry about. Dogs can also get non-food items stuck in their mouths, however. Sticks can become wedged between their jaws, and bits of their favorite chew toy can get stuck in their mouths. Carefully inspect your dog’s mouth to see if you can determine the problem. If it’s a stick or something else seriously stuck, head to the vet to have it removed by a professional.

Licking in general is often a sign of stress in dogs. PetMD lists licking as a canine behavior that releases endorphins in the brain. These feel-good chemicals are self-soothing to the dog, and in turn, licking turns into a habitual response when they’re stressed or anxious. If you see your pup licking the air for long periods of time every day, there’s a chance the habit has evolved into a compulsive disorder. Vet Street says,

“Comulsive behaviors are marked by high reptition over extended periods of time and often do not seem to fulfill a noticeable purpose.”

The best chance at diagnosing a compulsive disorder is to catch it early on. In the early stages, the licking will only happen when the dog is triggered by a stressful situation. For example, they only lick the air when the family is being extra loud or when guests come over. Over time, however, the compulsive behavior starts happening more often. This makes it harder to determine what the dog is actually stressed about. In some cases, the dog will lick the air for hours at a time, and they’ll only stop when they’re hungry or ready for bed. What started as a response to stress turns into a behavior that affects their entire life.

If you’re not sure if your dog is licking air due to stress, start a journal documenting what’s going on around your dog when it happens. Write down where they are, who’s around them, the noise level in the house, and look at the clock to see how long it lasts. If they’re also cowering, tucking their tail, yawning, or panting, stress is a likely culprit.

Compulsive disorders can be difficult to treat, but it’s not impossible. Take your journal to your next vet visit and explain to the veterinarian what’s happening. It will also help if you can get a video of your dog licking the air. The vet will be able to determine if the behavior is related to a compulsive disorder, and they can suggest a combination of behavior modification training and possible medication to help bring your pup some peace of mind.

Excessive licking is generally a symptom of tummy troubles in dogs. Gastrointestinal disorders like acute pancreatitis and acid reflux disrupt the dog’s digestive system. Because dogs can’t complain about their pain, the issue often goes unnoticed by the dog’s owner. PetMD reports about 60% of dogs that show signs of excessive licking have an underlying gastrointestinal problem.

Licking the air seems to be a way for dogs to cope with nausea. Sometimes vomiting and diarrhea are included as symptoms, but they’re not always. The dog may also be sensitive to being touched around the abdomen and have a decreased appetite. Chronic pancreatitis and other GI disorders can lead to more health concerns if left untreated. It’s important to see a vet to start treatment.

4. It’s caused by a partial seizure.

While gran mal seizures are scary episodes where a dog loses control of their body and begins to twitch, paddle their legs, and foam at the mouth, there’s another type of seizure harder to identify. Partial seizures aren’t as dramatic, and they’re focused on only one side of the dog’s brain. The resulting symptoms depend on what area of the brain is having the seizure. One of the common movements associated with partial seizures is air licking or biting. 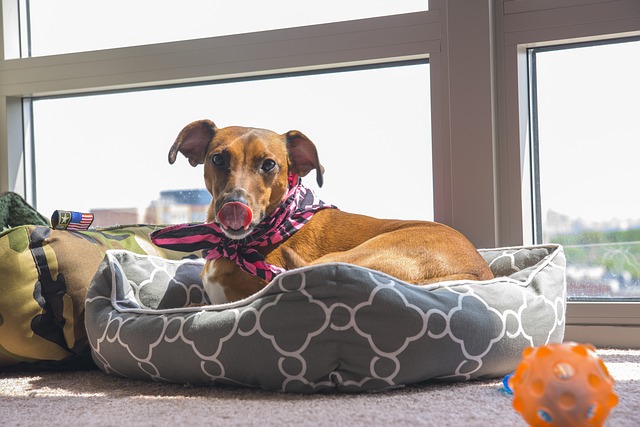 If your dog is having frequent partial seizures, it could be related to a serious medical issue. The trick, however, is in the diagnosis. Dog Discoveries explains,

“Diagnosing seizures is not easy in dogs as it would require recording the brain waves produced during the epileptic event in hopes of detecting the associated brain wave abnormalities, but it’s not like dogs can sit still for extended periods of time with electrodes stuck on their bodies while waiting for a seizure to happen!”

Showing a video of your dog licking the air to your vet and recording how long the episode lasts will help with a diagnosis.

Licking the air should only be a concern if you notice it happening on a regular basis and for long periods of time. The occasional tongue flick is nothing to worry about, and if your pup is especially enthusiastic about giving kisses, they could be licking the air in front of your face in an attempt to get closer and give you a good smooch. If you’re concerned the behavior is interfering with your dog’s quality of life or it’s difficult to get them to stop once they start, schedule a vet visit. Both you and your pup will benefit from a professional’s opinion.