Our dogs’ body language is complex, and can mean different things depending on the situation. When you’re closely bonded with a dog, it almost feels like you can read each others’ minds. You know your companion’s tones, mannerisms, and expressions. You can often interpret what they’re trying to communicate with just one look.

But when it comes to people interacting with others’ dogs, you may not be able to interpret their signals quite as clearly. That’s why it’s so important to learn common cues, for the comfort and safety of everyone. Below are 8 dog body language signals that are often misinterpreted because they can have multiple meanings. 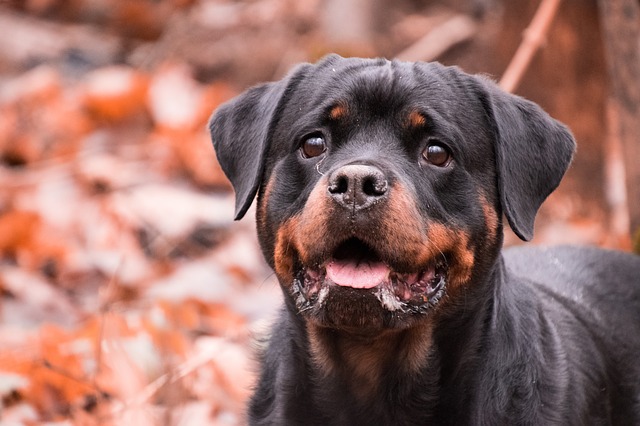 Everyone knows that dogs wag their tails when they’re excited or happy to see us, but they can also use this body language to convey other emotions. Psychology Today explains the following types of “tail wags”:

● A slight wag, with each swing of only small breadth, is usually seen during greetings as a tentative, “Hello there,” or a hopeful “I’m here.”

● A broad wag is friendly: “I am not challenging or threatening you.” This can also mean: “I’m pleased.” This is the closest to the popular concept of the happiness wag, especially if the tail seems to drag the hips with it.

● A slow wag with the tail at half-mast is less social than most other tail signals. Generally speaking, slow wags with the tail in neither a particularly dominant (high) nor a submissive (low) position are signs of insecurity.

● Tiny, high-speed movements that give the impression of the tail vibrating are signs the dog is about to do something, usually run or fight. If the tail is held high while vibrating, it is most likely an active threat. Yes, dogs bare their teeth and growl when they’re feeling aggressive, scared, or defensive, but it’s also totally normal body language for them to express a play growl, too. If your pup — or someone else’s — is playing tug-o-war with you or a pal and gives a low rumble, don’t be alarmed as long as the rest of her body language says “I’m having fun!”

Keep a close eye on her ear and tail positions for other cues, and if things start to get too rowdy, try switching to a calmer activity. 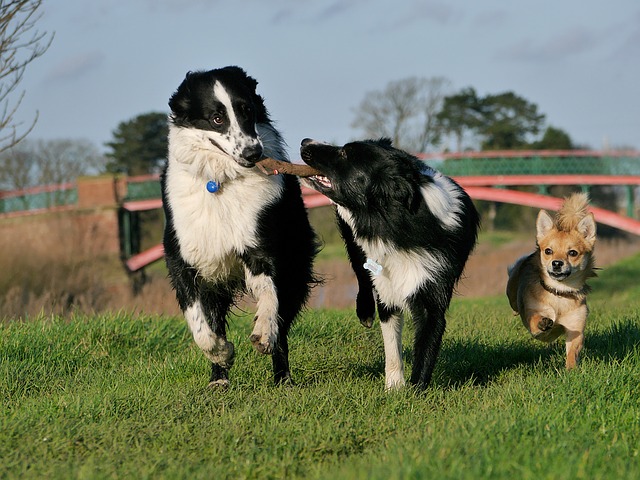 You may have seen this open-mouthed, toothy body language when your pooch is prancing around outside or waiting for you to throw his favorite ball, and you could swear he was smiling. But there are other “smiles” that don’t indicate happiness. 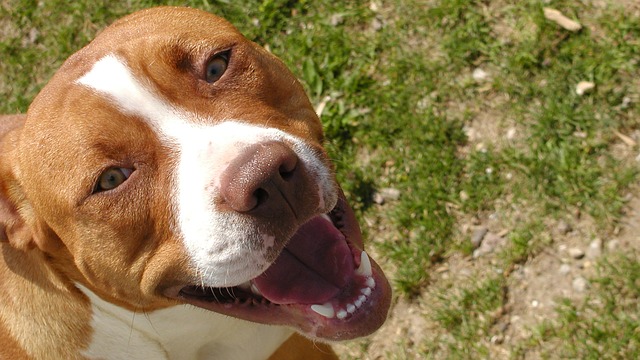 “In this pose, the dog lifts his upper lip up to reveal his front teeth with a closed mouth. Puppies will do this to older dogs, and dogs will do it to us when they are uncomfortable about something or if the person or other dog is showing aggression towards them.”

“Dogs will also pull their lips back to reveal with front teeth when they are about to bite. Sometimes they will lift the lips up in the same way [as the submissive grin], making it hard to tell if the dog is appeasing you, warning you of impending aggression, or if the dog himself has not decided which route to take.” 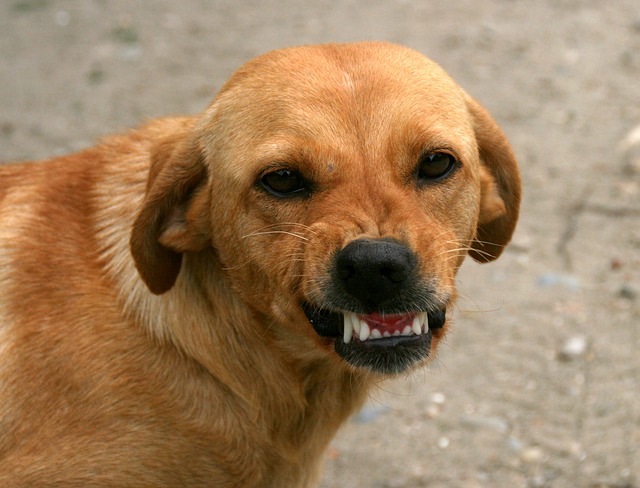 There’s also a type of closed-mouth restrained grin that dogs often display when they’re feeling stressed or uncomfortable. Assess the situation to determine how your pooch is feeling. If it’s someone else’s pup who’s “smiling,” give him some space until you get to know each other better.

If a dog flattens her ears against her head, it can mean multiple things. If it’s a pup you just met, your best bet is to keep your distance. Along with lip-licking, this can be distinct body language of fear or uneasiness. This is especially likely when seen with a low or tucked tail. If the dog has pinned ears, bared teeth, and a high, vibrating tail, she’s showing signs of aggression.

Now, there’s a flip side: if the pup’s ears are back and her expression is soft (perhaps you’re stroking her head or she’s approaching with a wagging tail), don’t worry. This body language just means she’s relaxed and happy to be soaking up your affection! 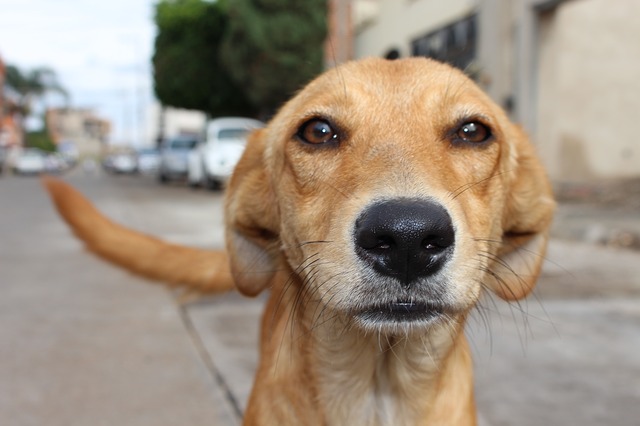 Like the previous example, eye contact can mean different things, depending on the human and the dog. As a general rule, humans should not make eye contact with pups they just met. This body language could be interpreted as a threat.

However, dogs are known to make eye contact with their humans when they want to communicate something. They will even gaze lovingly into the eyes of people they trust. Dina Fantegrossi, a former vet tech, writes:

“In 2015 a study published in the journal, Science delighted dog owners when it revealed that oxytocin, a hormone associated with nurturing and attachment, increases in both our dogs’ brains and our own when we look at one another.” 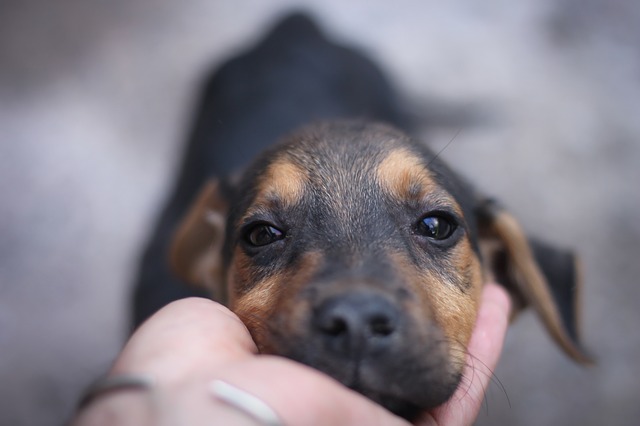 You know that dogs will pant as a way of cooling down on a warm day or after vigorous activity. But did you know it can also be an indicator of how they’re feeling?

Panting can be a sign of stress, so if the pup doesn’t seem hot or tired, pay attention to their body language. If it’s an unfamiliar dog, give her space and refrain from making sudden movements that could startle her. If it’s your dog, consider what might be stressing her out and try to remove her from the trigger. No, dogs don’t only yawn when they’re tired.

Interestingly, it’s quite the opposite. Our pups often yawn when they’re feeling anxious, confused, or stressed. They can also stretch their mouths open wide in anticipation of something exciting, like a walk or a car ride. Sometimes, dogs yawn as a non-threatening calming signal when meeting new friends.

Another fun fact about canine yawning body language: it’s contagious between humans and dogs! It’s a phenomenon that may indicate that our companions are capable of empathy. Aww! 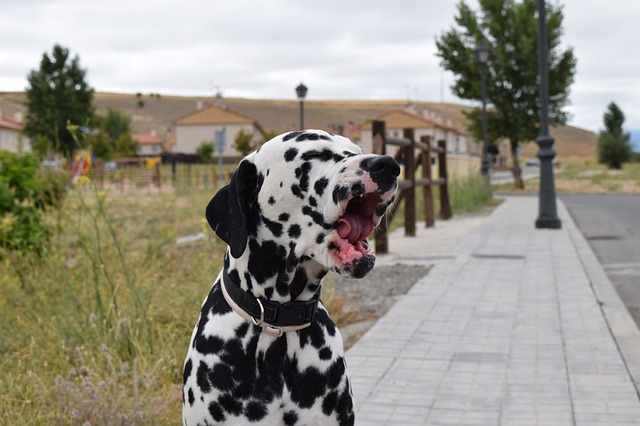 It’s not always a mouthwatering steak that gets dogs licking their chops.

Like yawning, lip-licking is a calming signal that pups use to show each other that they mean no harm. This body language can also indicate fear, nervousness, or stress. If your pooch is in a situation where he keeps licking his lips, consider whether something is making him uncomfortable. If it is, perhaps you should change the environment. 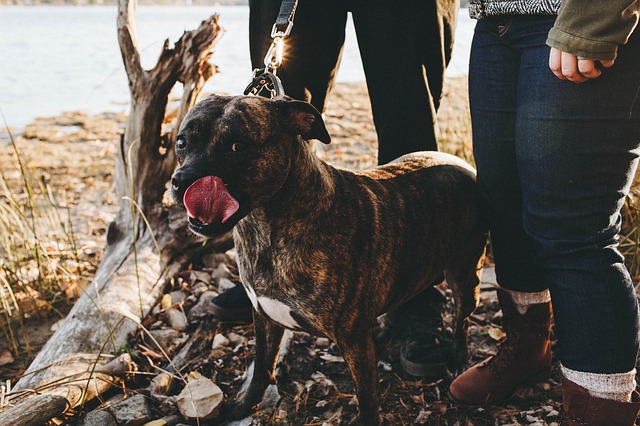