Seeing your dog tremble or whimper in a stressful situation can break any dog parent’s heart. We want our furry friends to live the happiest, most comfortable lives possible, but many anxious pups struggle with fears and worries. Luckily, chamomile for dogs may be able to ease your pet’s stress while benefitting other areas of their health.

Humans often feel relaxed after a nice cup of chamomile tea, but many don’t realize that the ingredient could have a similar effect on their dogs. Giving your dog a supplement with chamomile could help with their anxiety, digestion, and much more. So, how does it work, and is it safe? 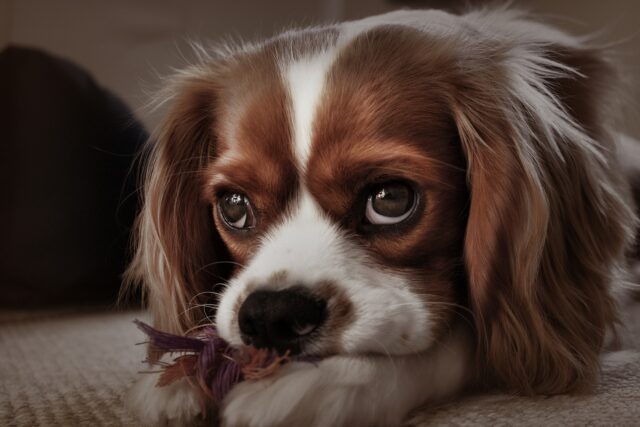 What is Chamomile for Dogs?

Chamomile is an herbal supplement known for its flowery taste. Humans consume it regularly in tea, but as it turns out, the herb can also be served to dogs. Its name is derived from the Greek word “khamaimelon,” which means “earth apple.” Chamomile got its name because it has a faint apple scent.

The term “chamomile” actually refers to several daisy-like plants instead of only one. Matricaria recutita and Anthemis nobilis are the two common types of chamomile that are regularly used for herbal supplements and tea. They’re more commonly referred to as German and Roman chamomile.

Humans have used this herb since ancient Egyptian times, around 1550 BC. Back then, it was used to cure fevers, but today, it’s more commonly used for calming stress and anxiety. Yet, there can be lots of other chamomile benefits for people, too, such as preventing osteoporosis, relieving menstrual cramps, and assisting with diabetes. Humans usually put chamomile in creams, incense, and tea to reap the benefits. 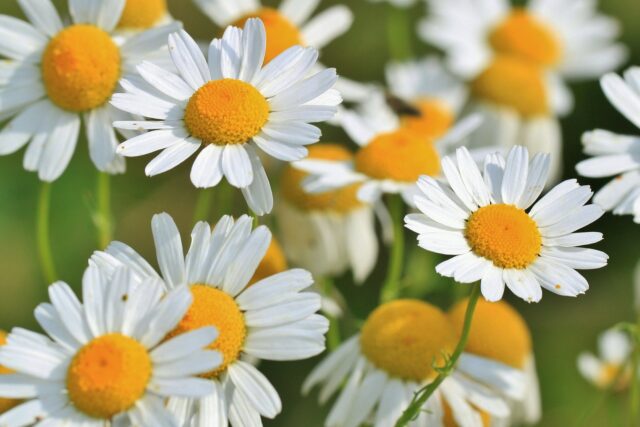 Terpenoids and flavonoids in chamomile are likely what cause it to have relaxing properties. Those natural plant compounds can reduce inflammation and harmful free radicals in the body, which leads to less illness and aging. If dosed appropriately, chamomile can have some of the same benefits for dogs as it does for humans.

Is Chamomile Safe for Dogs?

Yes, chamomile is usually safe for dogs, but only if you give them the proper dose. Like any medicine or supplement, it could cause side effects for some dogs. So, always consult your vet before adding something new to your pet’s diet.

There aren’t a lot of studies proving chamomile’s effects on pets. Some studies have shown anxiety-reducing effects for humans, but it hasn’t been as deeply researched for dogs. That’s why vets won’t usually suggest chamomile over other remedies. Yet, it’s still a low-risk herb for which you don’t need a prescription.

While chamomile is safe for dogs, it’s not recommended for cats. It may cause bleeding disorders in felines, so the risk isn’t worth the benefits.

Is Chamomile Tea Good for Dogs?

Chamomile tea is usually used for topical relief in dogs rather than as a consumable. That’s because dogs can’t handle as much chamomile as humans can, so human-made chamomile products can be unsafe for canines. Thus, you should only use chamomile tea as an occasional topical remedy for your furry friends. What Can Chamomile Do for Dogs?

Chamomile is most well-known for its relaxing properties, but it can do a lot more than just that for canines. Here are some of the many positive effects this herb will have on your dog.

Chamomile’s anti-anxiety effects may work similarly for dogs as they do for humans. It’s unclear why chamomile works so well as an herbal sedative, but it’s suspected that it contains natural chemicals that can relax muscles. Like humans, dogs can experience many unusual symptoms related to stress. So, the herb can also help with a nervous stomach, which can decrease vomiting, indigestion, and flatulence in dogs.

On its own, chamomile only benefits mild anxiety. That’s why it’s commonly paired with other relaxing ingredients like valerian root. Canine supplements with multiple anxiety-reducing items are perfect for easing your pup’s stress.

This herb also has anti-microbial properties that can heal skin irritation and infections. While it can still be used as a supplement, it can also work as a skin rinse. Put cooled chamomile tea on your dog’s skin after a bath to soothe any dry, irritated patches. Before using the tea, make sure it doesn’t contain any ingredients that could potentially harm your dog.

While it may provide some itch relief for dogs, it won’t cure severe skin infections. If you’re unsure why your dog’s skin is so irritated, you should talk to your vet before using chamomile. They may find that the inflamed skin results from something more serious, meaning it can’t easily be cured using an herb. Chamomile’s anti-inflammatory properties aren’t only effective on skin, but they may also be able to soothe eye irritation. You can feed your dog supplements or place a cool tea bag against their eye. Again, always check the ingredients in the tea before it comes into contact with your dog.

You’ll need to apply chamomile to the eye two to three times daily for it to be effective. If the irritation persists or worsens after a few days, talk to your vet immediately. There’s always a chance something more severe could be wrong, so it’s better to be safe than sorry.

This herb can also have some sedative effects on your dog’s digestive system, making it great for controlling indigestion, gas, and vomiting. It relaxes the muscles in your dog’s stomach and bowel areas, which can decrease any discomfort related to gastrointestinal problems. However, if your dog has a serious gastrointestinal issue, chamomile alone won’t solve the problem. In that case, you’ll need to talk to your vet about additional solutions.

Chamomile may be able to prevent and remove worms from your dog’s body. It may not act as fast as stronger herbs like wormwood and black walnut hulls, but it’s safer to use over long periods.

Chamomile’s anti-inflammatory properties also prevent damage from worms, such as skin irritation. It’s especially effective if used with other herbs like marshmallow root. This herb works slowly to repel pests, so it functions better as a preventative than a cure. However, most vets recommend a brand of preventative as opposed to a natural one. 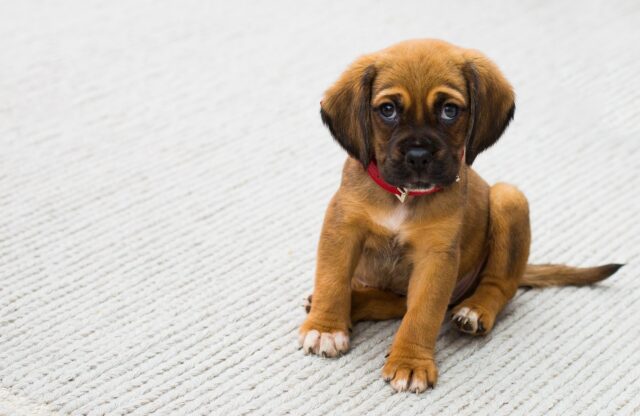 While it’s not commonly used for this purpose, chamomile may be able to strengthen muscle tissue in your dog’s body. It’s especially good for protecting the tissue around the heart, bladder, and uterus. It’s not the most effective ingredient for heart health, but it’s an added benefit of chamomile that many pet parents don’t know about.

How Much Chamomile for Dogs is Safe?

The chamomile dosage for dogs isn’t set in stone. It can vary significantly based on the supplement you use. For the most accurate dosage, ask your vet. They can give you a recommendation based on your dog’s age, weight, and medical history.

If you give your dog a supplement in the form of a pill or chewable treat, you can usually give them between one and three tablets per dose, depending on their weight. When using chamomile tea on your dog’s skin, you should use only enough to cover the irritated spots.

Never go above the recommended dosage when giving your dog a chamomile product. When in doubt, start at a dosage lower than suggested and gradually work your way up to the correct dose. That way, you can ease your dog into it to closely monitor potential side effects. Most dogs don’t face any risks when taking a proper chamomile dose, but it’s better to be safe than sorry.

Side Effects of Chamomile for Dogs 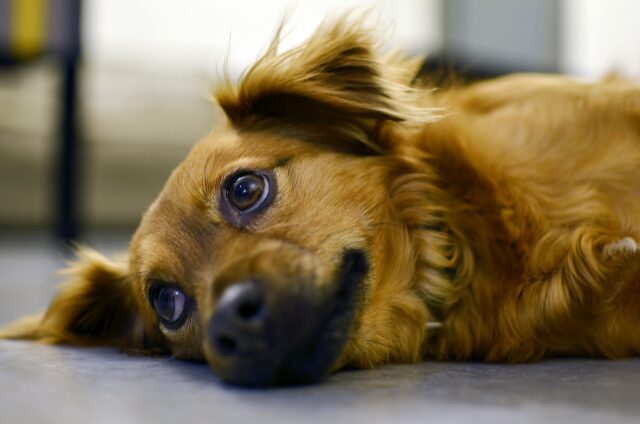 Minor cases may only involve gastrointestinal issues, but more serious situations could lead to internal bleeding. A drastic overdose could even be fatal if not treated in time. So, if your dog experiences any unusual behaviors after consuming chamomile, contact your vet right away.

Dogs who have allergies to chamomile or other plants in the daisy family, such as ragweed, should avoid products with the herb. Also, there isn’t much information about how it could affect pregnant dogs and young puppies, so it’s best not to serve it to them.

If you miss a dose of chamomile for your dog, wait until their next scheduled dose to give them more. Giving them two doses too close together could increase the risk of side effects. Chamomile can be a safe, beneficial herb, but it works best if given in proper amounts like all supplements. That’s why a vet’s opinion on dosage is crucial.

Are There Any Drug Interactions?

Yes, there are a few medications that may cause negative effects with chamomile. Here are a few drugs to avoid giving your dog if they’re taking a chamomile supplement:

Any medications and supplements have the potential to interact with each other. So, before you start giving your dog chamomile, inform your vet of any other drugs your dog is taking. That way, they can tell you of any potential concerns before it’s too late. 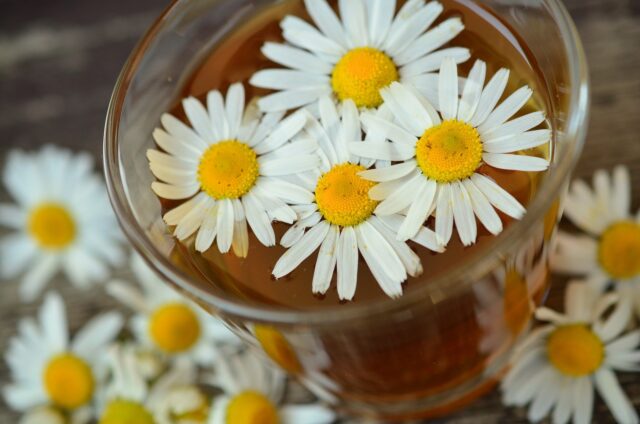 How to Serve Chamomile to Dogs

Chamomile is most commonly given to dogs as an edible supplement. Most supplements include other calming ingredients like organic hemp and valerian root. Some supplements may be in the form of pills, but the ones that look like chewable treats are often more favorable for dogs. Dogs will think chewable supplements are a delicious treat instead of something healthy. Some CBD products include chamomile as the main ingredient.

In some instances, chamomile may come as a powder, liquid, or crushed-up version. While these options are less common, they’re usually just as effective. You can mix these forms with your dog’s food when serving it to them.

However, if you’re looking to use chamomile for irritation instead of anxiety, you can use a chamomile tea rinse. You can apply the rinse to itchy or inflamed areas of their skin to provide relief. It may soothe minor inflammation, but a vet should examine more serious cases.

So, how you choose to serve chamomile to dogs depends on what you’re using it for. Luckily, chamomile chews can cover most of the plant’s health benefits, especially calming effects.

When choosing a supplement for your pup, it’s essential to purchase products from a company you trust. Look closely at the ingredient list to ensure that it only contains items that you feel safe serving your furry friend. When in doubt, find a different product.

The iHeartDogs 9-in-1 Calming Chews contain chamomile and other anxiety-relieving ingredients. They come in the form of chews, so even picky eaters will happily take them. These chews can help ease anxiety, promote better sleep, improve digestion, and much more. 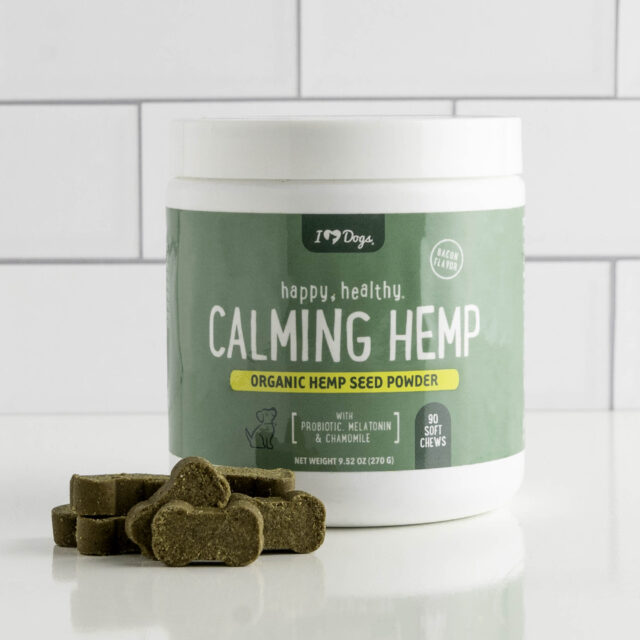 In addition to chamomile, these supplements include organic hemp powder, valerian root, melatonin, and L tryptophan. All these ingredients help with anxiety relief, and some benefit other areas of your dog’s well-being, such as seizure control and heart health. Plus, every container donates 14 healthy meals to shelter dogs. So, while you’re relieving your dog’s stress, you’ll also be benefitting dogs in need.

Watching a dog struggle with anxiety is heartbreaking for any pet parent. So, using chamomile for dogs is an easy way to help your pup enjoy life to the fullest. It can help with canine anxiety and other health aspects like irritation and digestion. Your dog will thank you in the long run! 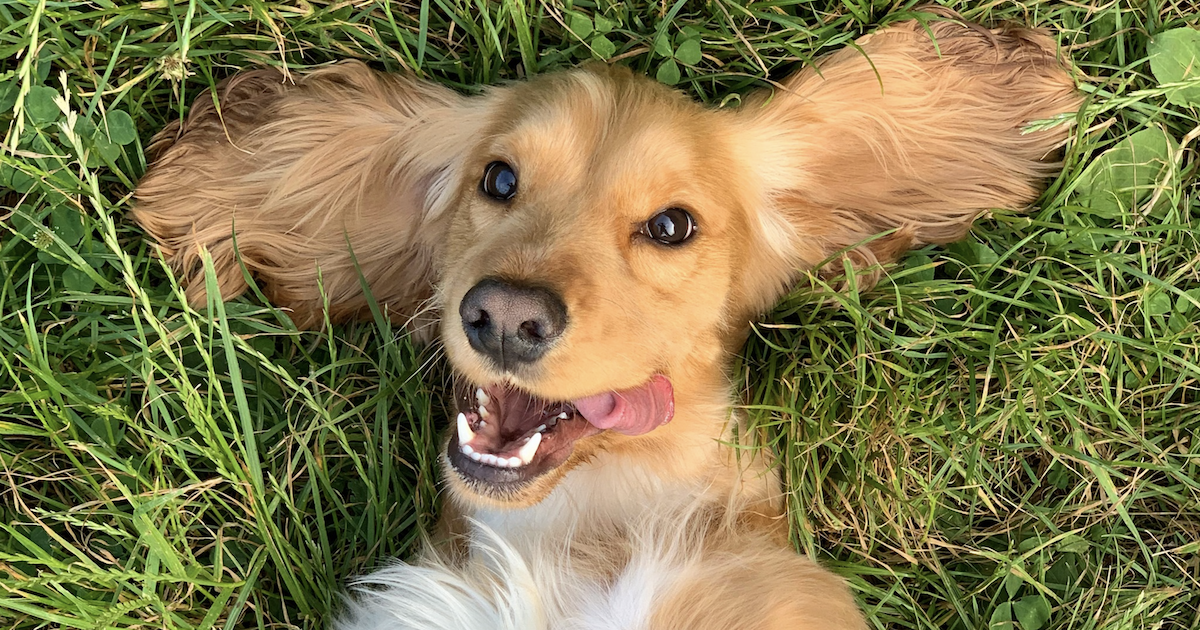